One of the coolest things about writing a novel is being able to share my influences with people. And man, have I been influenced; there have been many, many hands that assisted in shaping my brain matter into the form it is now. The first influential book I want to mention, however, is a little bit unusual, in that it is not a novel but a "how to" book entitled "The Easy Way to Quit Smoking", by Alan Carr. 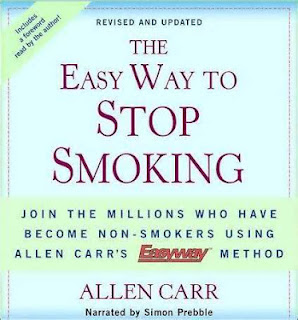 It's hard to explain the effect this book had on me, but it went beyond helping me quit smoking. The book did not so much stop one from smoking as much as it brought one to a mindset where one perceived of stepping away from the nicotine addiction as not only supremely logical, but easy and fun as well. My addiction to tobacco was not some moral weakness of mine, but a trap I had fallen into and could find a way out of, with simple step by step instructions. Its influence is apparent in my debut novel, in the way my protagonist feels imprisoned by various forces beyond his control. His eventual liberation is comparable to the elation and freedom I felt when I smoked my last cigarette. I really can't explain to you the joy I felt at that moment, a joy that has spilled over into many different areas of my life and stays with me to this day. The comparison between smoking and escape artistry will be even more obvious in my next book, tentatively titled Perchance to Dream.﻿
Posted by James Rozoff at 1:46 PM No comments:

Here is a short story I wrote many years ago. It is very short, only a page long. Actually it is a dream that I had, which I recorded as best I remembered it. Although it is a favorite of mine, I've never known anybody to appreciate it. Thus I release it onto cyber-space, hoping that someone in this grand universe of ours might see in it what I do:

About a year ago I had the strangest dream. I was sitting up in bed, reading a book of short stories I had acquired a while back but had never gotten around to reading. I had just finished a rather lengthy story but, not quite ready for sleep, flipped through the pages to find a shorter one. The very next story was only four pages, so I began to read. “My name is not important, I am one of many…” it began. It was the story of an old man, one who had lived a long full life of adventures and experiences. Much good he had done in his life and much had he learned, yet one thing still eluded him. His life, he knew, was incomplete until he discovered the answer to the question that had troubled him throughout his life. And so he set out upon the last and greatest quest of his life: a quest for the meaning of life.


His search led him through many adventures which I can no longer remember, but in the end the trail led up a range of many high, silver mountains. Within one of these mountains he discovered a cave. Entering the cave, he saw a woman dressed in white, there as if for no other reason than to await his arrival. Intuitively, the old man asked the woman if she could help him in his quest. The woman said nothing but led his gaze off to the side of her where a glowing horizontal line appeared. As they both looked at the line, it grew larger, as though it was a large flat screen that rotated until the old man could see an image upon it. It seemed to him to be a picture of the silver mountains that surrounded him, their snow-capped peaks a bright white. But slowly the picture began to move. The mountains began to rise and fall as though millennia were moments. The motion increased further until the old man realized that the mountains were waves of a sea; the snow-capped peaks were white caps reflecting the light of an unseen sun. The sea itself was the color of purest silver. But as the waves pushed upwards, the uppermost tips that reached for the sky were of a white that paled the silver.


“What is it that you show me?” the old man asked.


“It is everything,” said the woman


“Then what is the meaning of life?”


The woman paused for a moment, smiled, and said: “To shine.”


The man looked back at the lake, saw the water moving endlessly, waves leaping skyward. The upper peaks shone brilliantly as they reached towards the heavens, then fell back into the silver as new waves reached their peak. The old man smiled, because now he understood. And so he began a new adventure, a new life.


“My name is unimportant, I am one of many…”it ended. As I finished the story, I smiled too, in appreciation of the old man. After a moment, I flicked back to the beginning of the story to read it again. I stopped short, deciding to save the story for another night. I placed the book on the table by my bed, turned the light out, pulled the covers over me, and woke up. I sat up in bed for a moment, wishing I had reread the story, and wondering what other stories I might have discovered in that book.
Posted by James Rozoff at 3:24 PM No comments: