Are You Technology's Bitch?

I have one of those rare jobs where the extent of my interaction with technology is when I use a computer to clock-in in the morning and clock-out when I leave. The only tool I use which requires electricity is a SawZall, which I have need of only on rare occasions. Yes, this is being written in the 21st Century, 2018 to be precise.

It is a joy to be free from technology for eight hours. Don’t get me wrong, I enjoy technology, it’s just that I want to pick and choose when and where I interact with it. I enjoy social media, binge-watch shows on Netflix with my wife, download podcasts I listen to with Bluetooth. But I’ve become aware that technology is not always a choice. Every appliance I own nowadays beeps at me. Usually it is trying to tell me something I already know, but sometimes things beep and I don’t even know why. It makes me feel stupid. It is not a refrigerator’s job to make me feel stupid. Keep my lettuce crisp and  keep quiet, damn it. 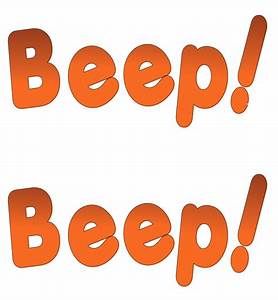 My Kindle beeps. Devices used for reading books should never beep. Beeping is anathema to reading. Beeping is the ultimate distraction. It is the Pavlovian signal that I must emerge from deep concentration and deal with some trivial task. And like a dog, I unthinkingly respond every time. I am technology's bitch. 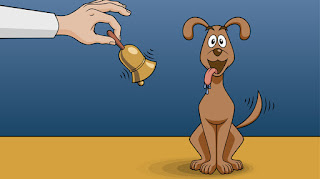 Speaking of dogs, my dog hates beeping. When she hears it on the television, she gets up from her spot on the couch and goes into the basement. Same for when the microwave finishes, the stove gets up to temperature, the refrigerator is not closed properly, the batteries in the smoke alarm starts dying, or my wife gets a text. Even my dehumidifier beeps. There is no need for that. My dog prefers being alone in the dark to the sound our infernal technology makes, and I don’t blame her. 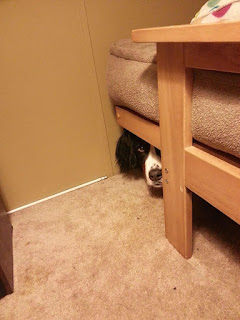 I don’t have a smart phone. I’m not sure how much money that saves me a month but I know it saves my employer a ton. I see my coworkers take the occasional glimpse at their phone the way any drug addict takes the occasional hit off a pipe. They get edgy when they start thinking about it and it’s been a while. Maybe they’ve missed something important, as if anything they’ve ever seen on Facebook has been important. At any rate, all productivity is lost until they've received a sufficient fix.

The thing I dread more than anything is when a coworker comes up to me with their phone to show me something they’ve seen on the internet. Never, in my entire life, has this turned out to be pleasantly amusing. It is at such times I cannot deny the banality of existence. I start to wonder if this is the same species that created space-flight and War And Peace. It is one thing to find a crude cartoon worth your time, it is another to frame it and hang it on your wall so that your guests must view it as well. At such moments I wish I was alone in a dark basement.

A coworker of mine is fond of pointing out to me how backwards our company is for not finding ways to employ technology to do our job better. When I inform him that it would only make my job less enjoyable, he tells me it doesn’t matter. What matters is that we find ways to improve efficiency and do things cheaper. I tell him I’d rather be happy, and that’s when he looks at me paternally, even though he’s always reminding me I’m older than he is. He then delivers the argument that has been drilled into his and every other American’s head, though he certainly believes he was intelligent to come up with it on his own.

He tells me that my sense of enjoyment comes not from the work I do but in the success we are able to achieve by using technology to beat out the competition. In other words, my success is the result of being more miserable at my work than some poor shmoe in some other factory. By upgrading my position to an even more alienated cog in a super-advanced machine, I can be the lucky one who keeps his job. I tell him that’s not exactly a win/win proposition.

But the real payoff of technological progress, he says, is not at work but the things we can buy with the money we receive from working at a job we hate. I as of yet do not have an ultra hi-def television, so there’s that to work for. But to spend 40 hours of week at work not enjoying myself, I would feel compelled to spend an equal amount of time watching my television in order to feel the tradeoff equal. That's a hell of a commitment.

In truth, if I were to get a new top of the line television with all the necessary accoutrements, it would probably sit half-assembled in my living room. The payoff just wouldn’t be sufficient motivation for me to finish the job. I’ve seen South Park in Hi-Def, and to be honest, it wasn’t all that. Besides, if I were able to follow all the necessary instructions and turn on my new 65” Class 4K (2160P) Ultra HD Smart QLED HDR TV, the first thing it would probably do would be to start beeping, in which case I held towards the safety of the basement. I'm glad I have a dog to keep me company.
Posted by James Rozoff at 6:37 PM No comments:

A Conversation With An Onion 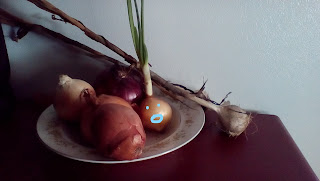 My wife keeps a bowl on the kitchen counter in which she places onions to be used for cooking. While packing my lunch yesterday, I noticed an onion that had apparently been sitting there for a long time and had begun growing, a shoot of six inches or so reaching skyward.

“What a futile action,” I thought. “There is no life for you. And now that you are no longer fit even to eat, you will wind up in the trash to be buried forever in a plastic bag in a landfill.”

Then, a very unusual things happened: the onion spoke to me. How it knew what I was thinking I cannot guess, nor did I stop to ask such a question, as startled as I was by this talking onion.

“I grow,” said the onion, by way of explanation, “because it is in my nature to grow. Lacking a developed cerebral cortex such as you possess, I would never think to do otherwise. And for that lack of an ability to overthink life, I must say I am immensely grateful.”

I wasn’t sure what annoyed me more, the fact that I could not deny that the onion was speaking to me or the imperious tone in his voice.

“That may be,” I said, unwilling to let an onion get the best of me in an argument, “but it is a pointless effort that will do you no good.”

“Nothing is pointless if you enjoy it,” said the onion. “Living is growing, and life is its own justification. It feels good to grow. Living and growing, those are the only two true joys possible, except perhaps in giving of oneself to nourish life in another. And while I was quite willing to share of myself as food for you in order that I might become part of your life, you left me sit too long and I grew impatient.”

“Nevertheless,” I said, “not to be cruel, but you are just an onion, and your desire to grow at this late stage is really quite absurd. Nothing will come of it. Sometimes you just have to give up the fight and admit you are beaten. It’s over. Just quit.”

“Oh, I suppose I should be like a human, with your big advanced brain. You are capable of seeing so much, and yet are able to rationalize away all that is important. You would have me give up while there is life yet in me. Now I am not as smart as a human, so maybe it is easier for me to understand the limitations of my intellect. But I see no reason not to live while the urge to burst forth resides within my oniony soul. I cannot see where it will lead, but neither can you, with all your capacity for thought.”

I thought for a moment, realizing this pungent little fellow may just be right. We do have no idea what meaning exists in our actions, try as we may. I thought of trees taking root on the rockiest of mountain sides, of flora finding places to grow from the thinnest cracks in sidewalks. Who could explain the meaning of it all, and yet it was quite amazing, even inspiring, to see life burst forth against all odds. It is best to live with all one’s might rather than to not live at all because your quite-possibly-faulty sense of reasoning cautions otherwise. And while it hurt my ego to admit it, this bulbous vegetable got the best of me in argument.

“Perhaps you are right, onion,” I said, enthusiasm in my voice. “Perhaps there is meaning in your drive to grow even in the most hopeless of situations. Who knows what may come of it. Why, perhaps it is your destiny to inspire me, one who has witnessed your tenacity and will to grow. And perhaps I can share with others a message of hope and appreciation for all the life that is. Perhaps I can let my fellow humans in on your secret and help make the world a better place.”

“Right,” said the onion, and I couldn’t help notice a hint of sarcasm in his voice, “like anybody’s going to listen to somebody who talks to onions.”

Posted by James Rozoff at 1:31 PM No comments: