Enjoy A Free Book, Help A Guy With Cancer

So I have this writer friend named Brandon Hale. That’s not unusual, a lot of people in the writing community call Brandon a friend. He’s that kind of person, the kind that you like immediately and never have any reason to stop liking him.
Sure, it’s easy to say someone is well liked, but a bunch of his friends are putting their money and time where their words are. You see, Brandon Hale has cancer in the intestines, and his entire attentions for the past six months have been on fighting for his life. That means he hasn’t been able to write, or edit, or promote, or do any of the things a writer has to do to put bread on the table. And that is where the independent writing community is stepping in to help a friend.
Some incredibly selfless people have donated money to promote the first book in Brandon’s primary book series, Day Soldiers. It deals with a dystopian future where vampires and werewolves have declared war on humanity. While intelligently written, it is still good reading for the younger set.
The goal is to get this book to #1 on the free list on Amazon. We’re up to #21 as I write this, so we’re getting close. This would not only be a symbolic victory, it would get Brandon the attention that all of us involved believe he deserves.
All that I ask of you is to pick yourself up a free digital copy and maybe give it a look. You might even want to pick up the next book in the series, no pressure. And if you want to share the information with others, that would be great too.
Day Soldiers on Amazon: http://www.amazon.com/Day-Soldiers-Brandon-Hale-ebook/dp/B007QJBBE2/ref=sr_1_5_twi_1?ie=UTF8&qid=1414713107&sr=8-5&keywords=brandon+hale
Day Soldiers on iTunes: https://itunes.apple.com/us/book/day-soldiers/id521459045?mt=11
Day Soldiers on Nook: http://www.barnesandnoble.com/w/day-soldiers-brandon-hale/1110016388?ean=2940033139743&itm=1&usri=day+soldiers

Posted by James Rozoff at 5:32 PM No comments:

The Road To The Association Cover

The Cover For The Association

So another book has been released and another cover done. They say you should never judge a book by its cover but they also say not to have more than two drinks in an evening: in other words, people do it so you better accept it. With that being said, I thought my choice for a cover for my third book in The Amazing Morse series would be easy. Early on I used the term “sleep of reason” in my book, and it seemed a natural title for it. I discuss the breakdown of the current cultural paradigms and the chaos that could ensue from that. The term “sleep of reason” of course comes from the etching by the Spanish painter Fransisco Goya, so it seemed a given that the cover should be some kind of reproduction of the famous painting. 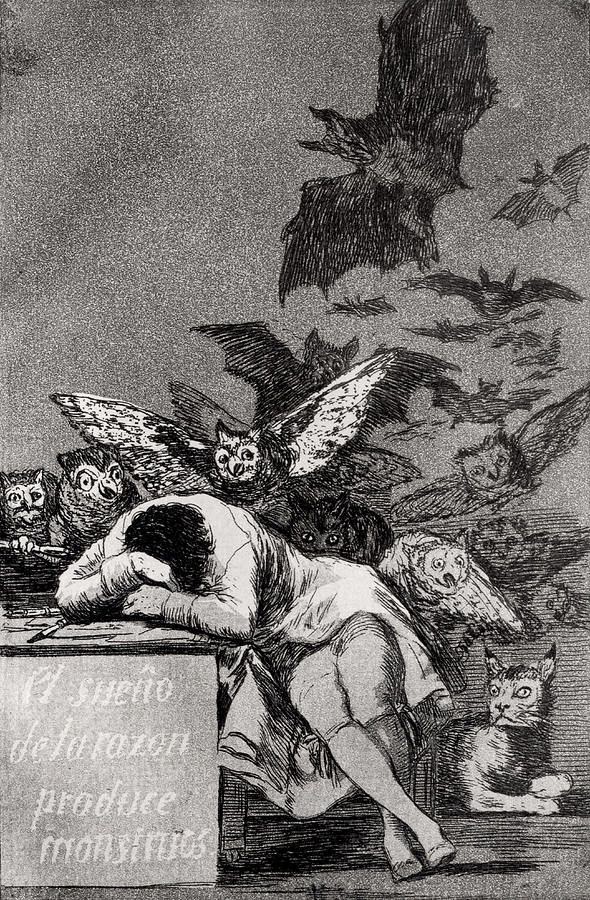 The full title of the etching, by the way, is “The Sleep Of Reason Produces Monsters.” I think that very well summed up a major element in my series, that demons and ghosts are creations of warped human life/energy/chi or what have you. Plus, the sleep element is also stressed in the title. My main character has the ability to see things in his dreams that come to light in real life. So all I had to do was get the artist I had for the first two books to redo the original.
Except that the more I wrote the more I started to think that maybe it wasn’t such a good cover for the book I was writing. While it fit in well with the overall series, there was nothing that tied it to this particular book. And I was already looking further down the road to the end of this series. There will be some climactic moment, some final book that draws to a conclusion themes and ideas that have been working their way through this group of books. I wanted to have that title and that cover in my hip pocket, to be used later at the correct moment.
It’s nothing new for me. Perchance to Dream was supposed to be the name for my first book (lifted from Hamlet, of course). The original idea for the cover of that book was this: 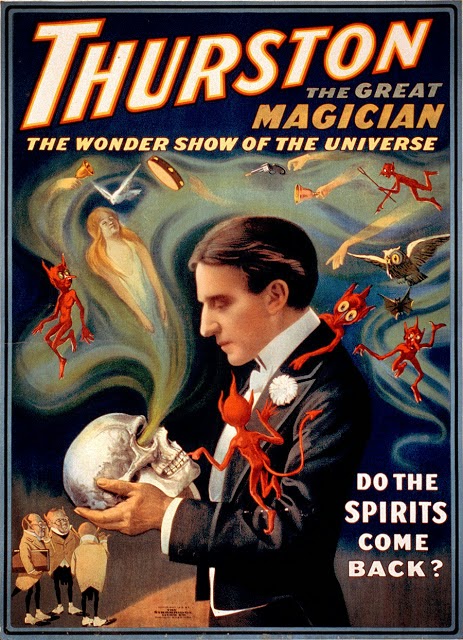 If you think about it, there are references here to Hamlet, a man staring at a skull contemplating death. But somehow the idea of The Amazing Morse got a hold of me. I liked the juxtaposition of  Amazing and Morse, a rather common name. I wanted to show the distance between Dave Morse’s aspirations and necessary showmanship from the reality of his life. It was meant to be somewhat ironic. Plus it kind of rolls of the tongue, what with the alliteration. And so I saved Perchance To Dream for the title of book number two, which ended up ruminating on death a lot anyway and included a Hamlet quote or two.
And so I now had to come up with a new name for my current book, just as for the first. I considered The Nineteen Cuts, and may have also briefly considered a few other names. Then I thought of The Association, named after the group that had fallen into evil and had ended up being the antagonists of the novel.
I liked putting the title of the book on a tombstone. The Association had died a century and a half ago, although their ghosts remained. The original picture that we used for the tombstone came from The JFK Prep, the history of which was a major source of inspiration for the book 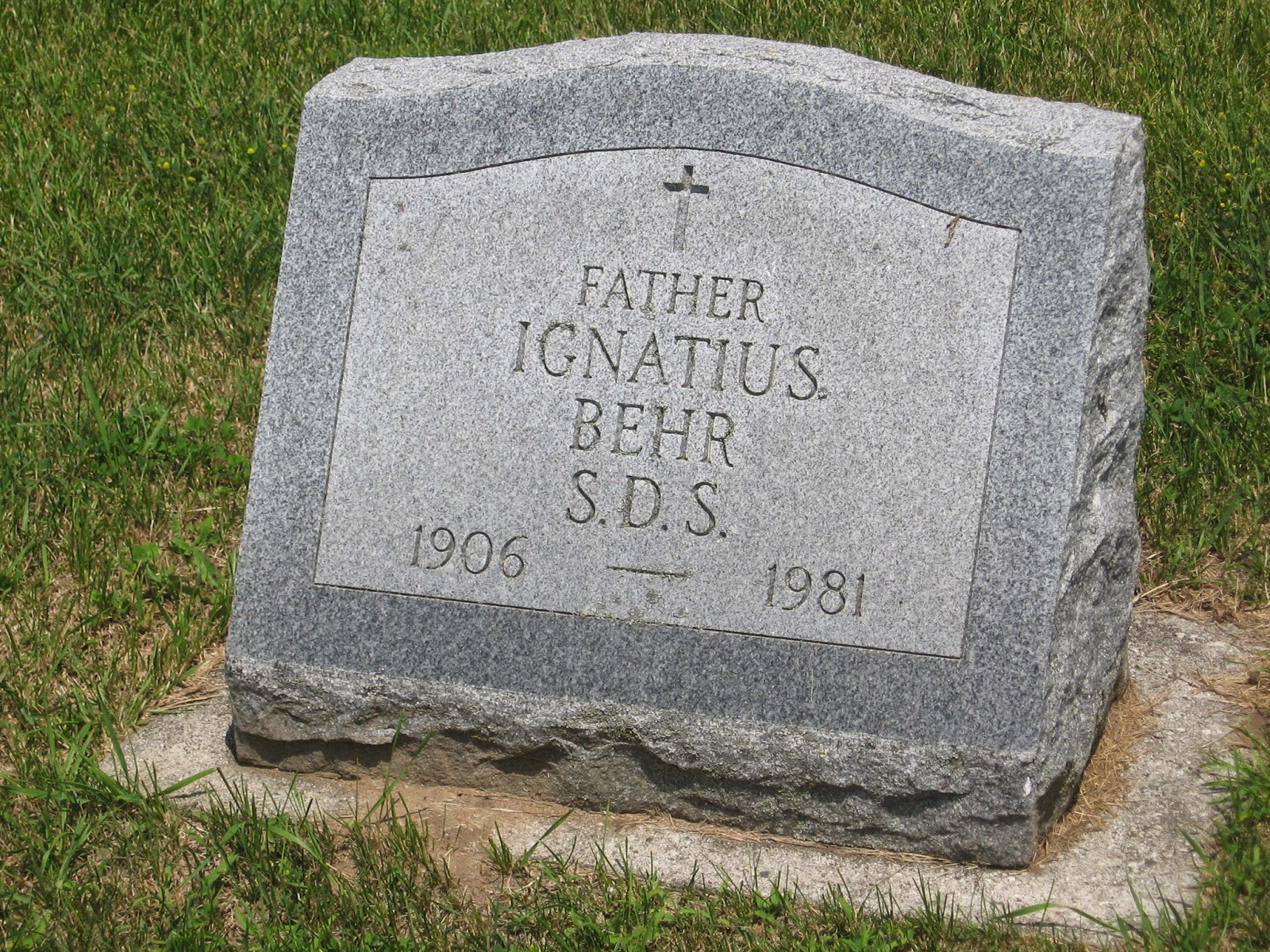 .
Here’s my original mock up for the cover: 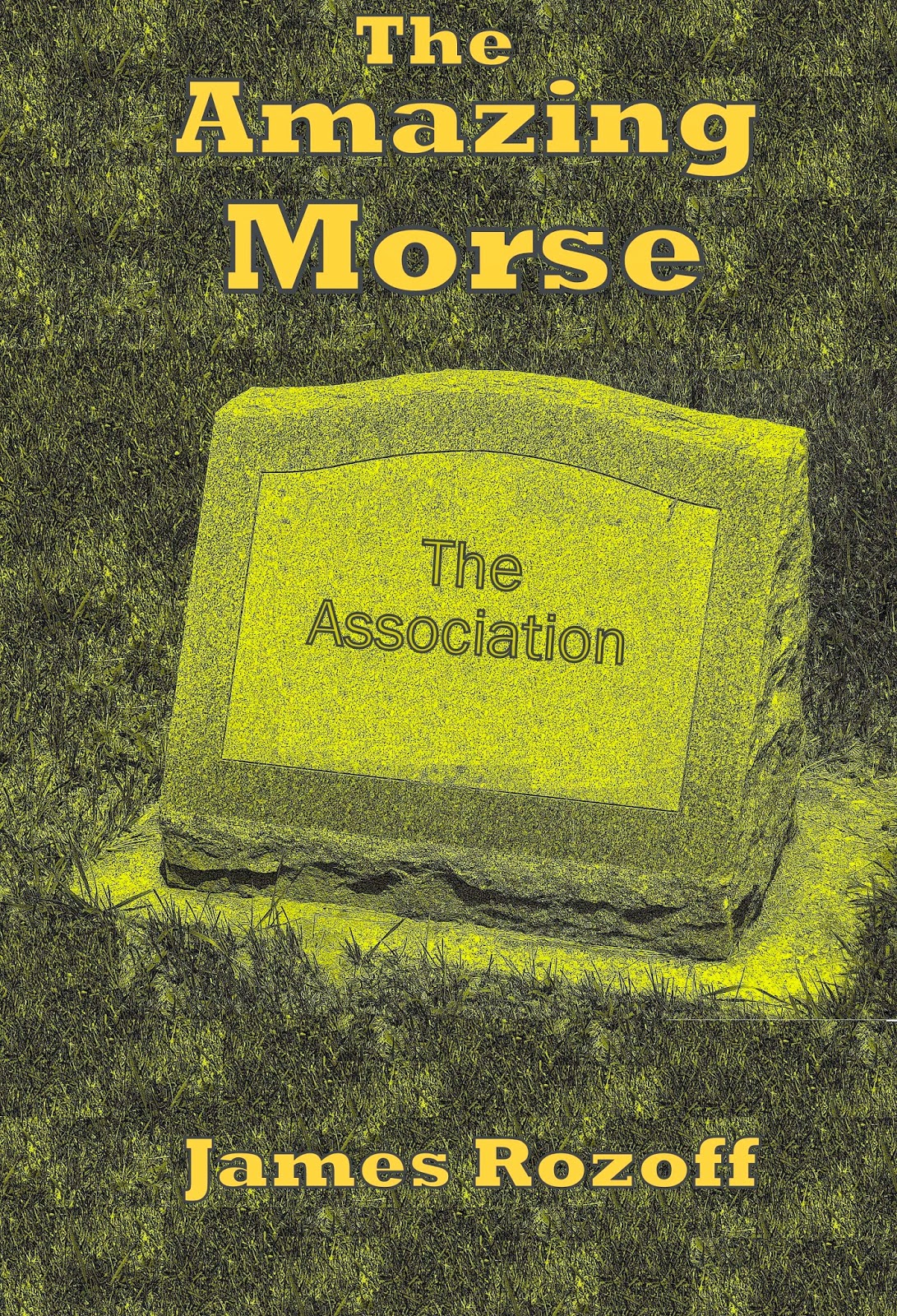 It was at that point that Suzie O’Connell became involved. She had done the non-painting portions of my first two covers. She has been doing so well with her writing that I didn’t think she’d want to be bothered doing my cover, but she was kind enough to not only do it but also put up with my constant input and requests for changes. Here’s a big shout out to you, Suzie. Thanks for all the help and the infinite patience. You can find more of Suzie's covers as well as her writing on her website: http://suzieoconnell.com/#
Oh, and remember what I said about the Sleep Of Reason for a future cover, Suzie J
And here’s the finished product: 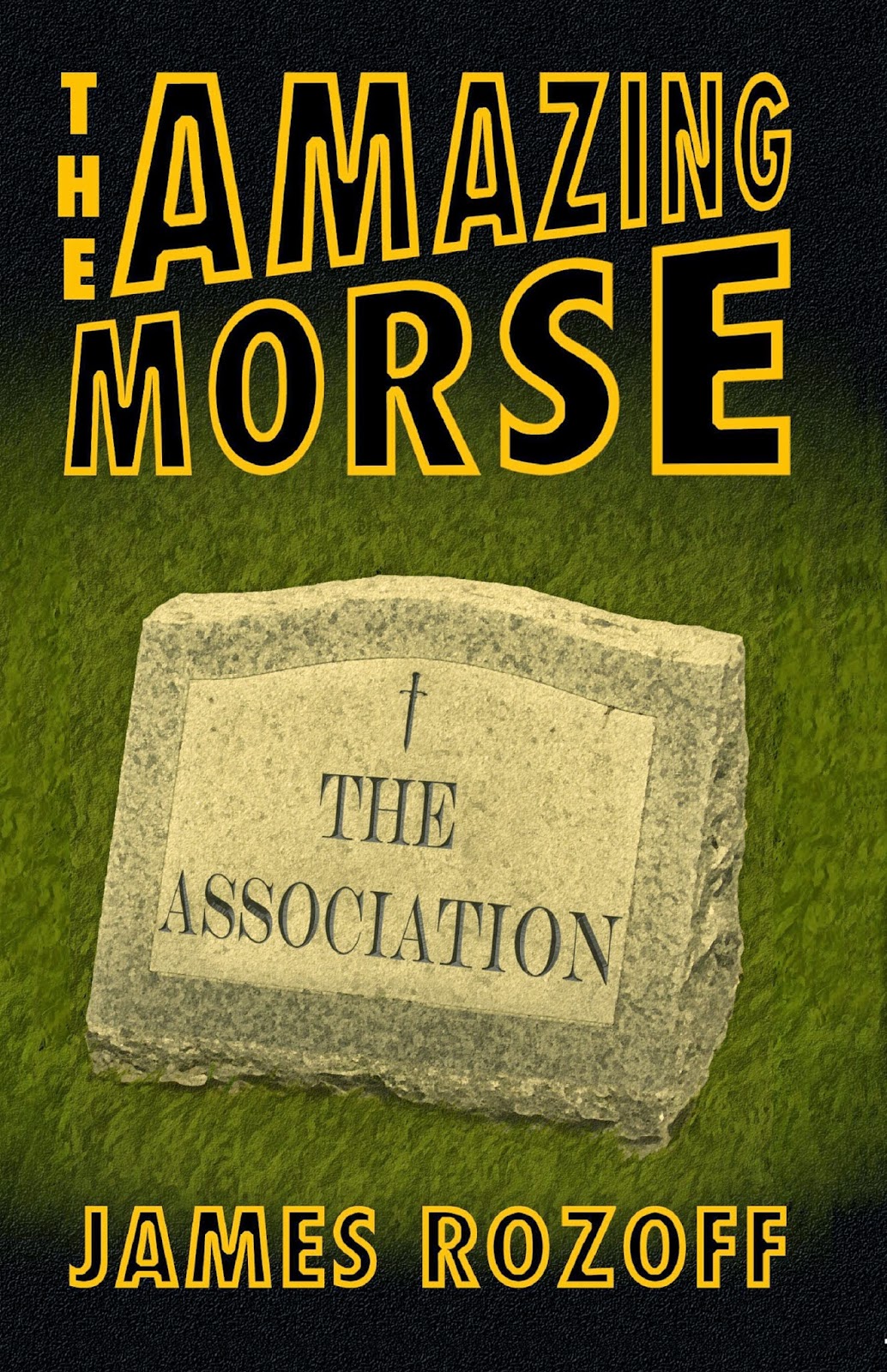 P.S. It’s not something anyone would notice, but I nevertheless made Suzie replace a cross on the tombstone with a dagger. We authors are a demanding lot, you know.
Posted by James Rozoff at 6:47 PM No comments:

Email ThisBlogThis!Share to TwitterShare to FacebookShare to Pinterest
Labels: -, Francisco Goya, The Sleep of Reason, Thurston The Magician

As a writing exercise, I was asked to write a story to be told around a campfire. This is the result. It can stand a rewrite, but campfire stories don't have that luxury, so I present it to you as it is in a single telling:


Laurie seemed to distance herself from my wife after that night, as though she didn’t want any reminder of what had happened. Perhaps it was her way of protecting her son. She broke up with Brian, too. I’ve seen him a couple of times at local stores, and we talk, but nothing about that night. It’s there, we both know it, but there’s really no way to broach such a subject. Not in the daylight. Not in the middle of our ordinary busy routines. It’s only around a fire, late at night, away from the ordinary world, that one can really discuss such matters.
Posted by James Rozoff at 8:51 PM No comments:

I earlier wrote a blog stating that I not only would not but could not write my books in order to appeal to readers of a certain genre. I don't think that's a bad thing, but I am, at least initially, prone to being misunderstood. I'm hoping that given time, people will come to know me and accept what it is I write. I fondly remember a dear friend of mine introducing me to someone else in this manner: "This is James, he grows on you." I like that, I like the idea that what you see is not necessarily what you get. Sometimes people put on a front. Me, I like to be a little more reserved, holding back what's best until we've earned each other's trust.

At any rate, my reviews so far have born out my guess that I don't fit readily in any convenient classification. Here are some quotes from readers on my various writings:

"This book is not your typical 'Horror Story'."  From Amazon review of The Amazing Morse

"This is a somewhat different novel of psychological terror and horror." Another Amazon review of The Amazing Morse

"Odd and Compelling" "I guess the genre for this book is semi-paranormal, but for me, it was an essay on reality and simulacra disguised as a novel." Amazon review of Perchance to Dream

"Different."  Barnes and Noble Review of Ashes on the Water

"Refreshingly original too, a different kind of horror." Smashwords review of The Amputation

"original" Smashwords review of The Amputation

So there you have it. If you're interested in something that isn't easily classified, something that is more than a carbon copy of something that has already been done, I invite you to check out some of my writing, which can be found by typing my name into a search engine. Or you can just click on one of my book covers located on the right side of the page.

And since I took the name of this post from the title of a Kinks song, I find it fitting to end it with a quote from another Kinks song (Working At The Factory):

Posted by James Rozoff at 10:52 AM No comments:

The Association (The Amazing Morse #3)

I have just hit the publish button for Amazon Kindle and am awaiting it to be made available for sale. This is the third book I've published and for some reason I have even more butterflies in my stomach than with the other two. Perhaps it is that the more I publish the more real the idea of pursuing this as a career seems to be. The first novel was a dream come true, and while I had some wild flights of fancy about what I could achieve with it, I really didn't know what to expect. The second book, it's hard for me to remember that far back. It's only been a year, but what a year it's been. Looking back, the fact that I've managed to write a book this year has been quite an achievement. I know people who've written 8 books in a year, so it doesn't seem like my one book is such a big thing, but for me it is. It's been a struggle and a major commitment, but it has also been a bit of an anchor for me, a refuge from the demands of the outside world. It has taken a lot from me, but it has also given back. Writing is a process of discovery. One has to look into the deep recesses of the mind, heart and soul in order to put something you're proud of on the page. I hope that's what I've done; at the moment I'm a little too fried-out to tell. I'll post a link here when it becomes available. In the meantime, here is the cover: 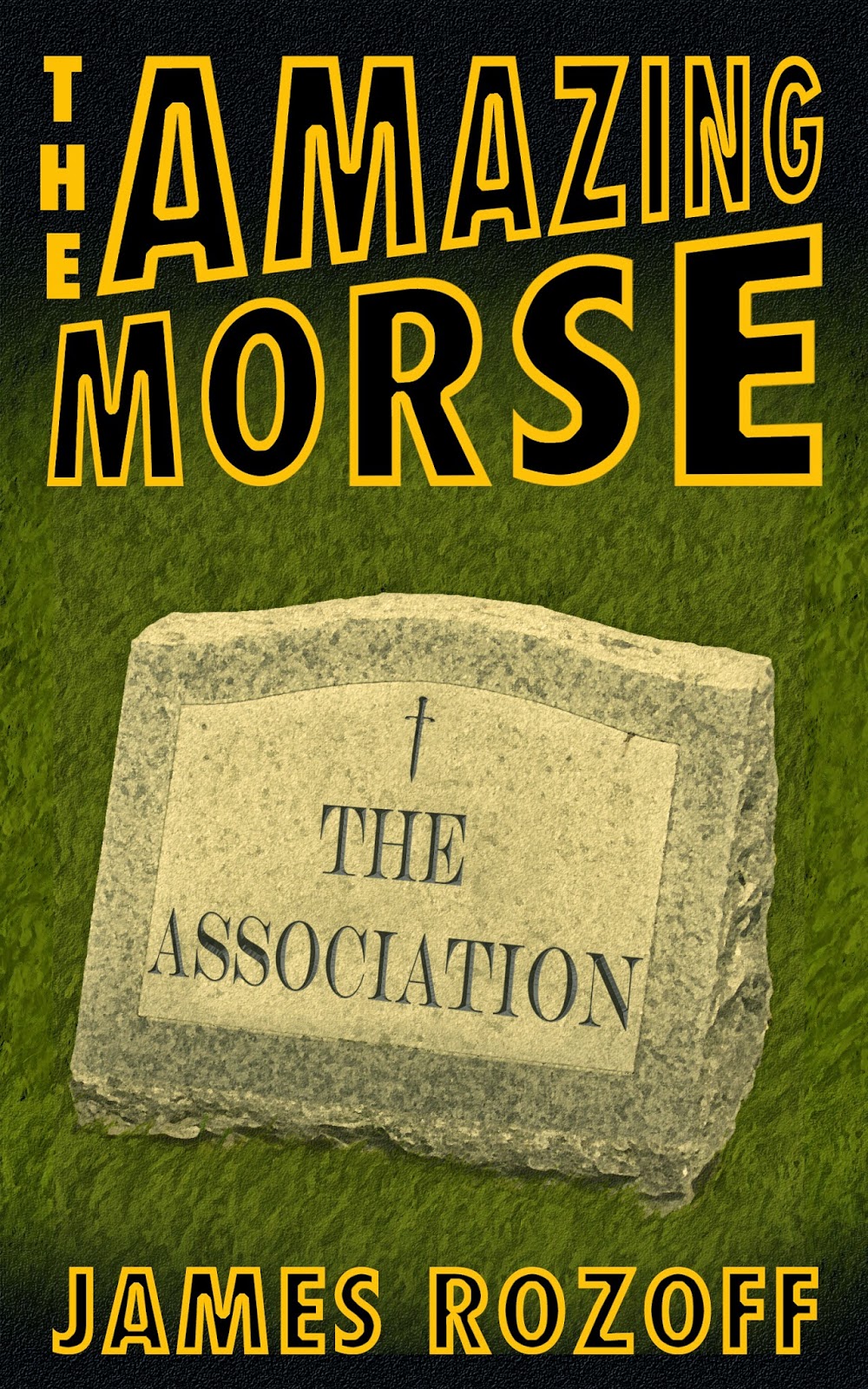 The Association is now available on Kindle. You can find it here: http://www.amazon.com/Association-Amazing-Morse-Book-ebook/dp/B00OL54DRQ/ref=sr_1_1?ie=UTF8&qid=1413511033&sr=8-1&keywords=james+rozoff+the+association