While out for a walk tonight, I heard a man screaming from behind a backyard fence. It took me a moment before I realized why it was he was screaming. Like seemingly everyone else on this planet, he was having cold water poured over him in the name of ALS.

I don’t claim to be an expert on Lou Gehrig’s disease, but I have been ahead of the fad this time. My newest novel, The Association, due out in September, involves a character with ALS. While only appearing in the final chapter, it is her disease that drives the action of the entire story. In a desperate attempt to find a cure for her illness, her boyfriend ends up dragging himself and others into a trap with seemingly no exit.
While I’ve always been aware of Lou Gehrig’s disease since seeing The Lou Gehrig Story as a small child, it really hit home for me when I chanced upon the documentary, Jason Becker: Not Dead Yet.

Did you ever feel jealousy towards another human being only to feel horrible about yourself afterwards? Years ago, I was driving home from a job I hated in my beat up old car, only to be passed by a shiny new convertible. I cursed my luck, wondering why I should work so hard and yet this person had more than I.
And then I spotted it, the wheelchair in the back seat. And then I felt horrible for wishing I had what this other person had rather than being thankful for what was given to me.

It was a similar situation with Jason Becker. When I was in my early twenties, my dad brought home an old guitar he had bought from a garage sale. I took it as a sign that I should learn how to play it. I practiced a good deal at it, but never got very good. A big part of my learning involved picking up copies of Guitar Players Magazine, where they would have the sheet music for a lot of classic rock songs. Being a reader, I read all the articles on all of the guitarists as well.

And that’s how I heard about Jason Becker. He was the wiz kid, younger than me but already being heralded as a major new talent and playing for the likes of David Lee Roth. I hated him, which is to say I was immensely jealous of him. Already older than him, I had no direction in life, had achieved nothing. Here he was already a better guitarist than I could ever hope to be, was making truckloads of money, and assuredly had his pick of women. And hair. Did I mention he had hair? This was the era of hair bands, of outrageously long hair. And I, I was already well on my way to baldness. The eighties was not a good era to lose your hair.

So I harbored a good deal of jealousy towards this rock star I had never met, disliked his music which I had never heard. But like all petty grudges, it faded after time.

Fast forward to 2013. I was flipping through channels on the TV when I came across the name of Jason Becker, and took a closer look. The old jealousy resumed as I wondered whatever came of him. Perhaps he, like Joe Satriani and myself, had lost his hair too. A petty thought for sure, but not the greatest of my sins by a long shot. But then I turned to the channel, and I watched the documentary, and then my smallness hit me full-on. ALS had taken more from him than any human being should have to stand, and yet I cruelly had wished for some kind of cosmic justice to level the playing field between him and me. More humbling still was that Jason Becker still had the courage to continue with his life and his music despite the hand he had been dealt. I am a very small man indeed.

But that’s when ALS truly caught my attention. I’ve been watching videos on YouTube and reading up on it since then. And somehow it wove its way into my story about a group of priests who had been healers centuries ago. And through a story that involves ghosts and faith and murder, a love story is woven about a man who wanted to save his beloved from a horrible disease and prove to her the healing power of faith. It will be available in a couple of weeks, as soon as my beta-readers and my cover artist have done their jobs. In the meantime, you can read my first book for free by clicking on the picture of the cover of The Amazing Morse on your right. Now if you’ll excuse me, I’m going to check out videos of people dumping cold water on themselves on Facebook.

Posted by James Rozoff at 6:04 PM No comments:

Another Walk Around JFK Prep

I've already posted some pictures of JFK Prep but thought photos shot towards sunset might be a little more atmospheric. And although the working title of my book was The Sleep Of Reason, I have changed it to The Association, saving the former title for a more appropriate time. I've also given the site inspired by JFK Prep a different name: it is not my intent to have people confuse my fictional creations with reality and I surely don't want to encourage any thrill seekers poking around the area. The present owners of the property are kind enough to allow people to stroll the grounds and I would hate to do anything to change that.

The story of the area is innocent enough, but it is the kind of story that seems to call for some ghostly elements to be added. It is not just me, rumors and stories of ghosts abound, but they are only rumors and stories. And the area is interesting enough to get the imagination wandering. So with that said, here are a few pictures:

There appear to be Stations of the Cross situated about the grounds, but whatever stood within these stone structures are now gone. 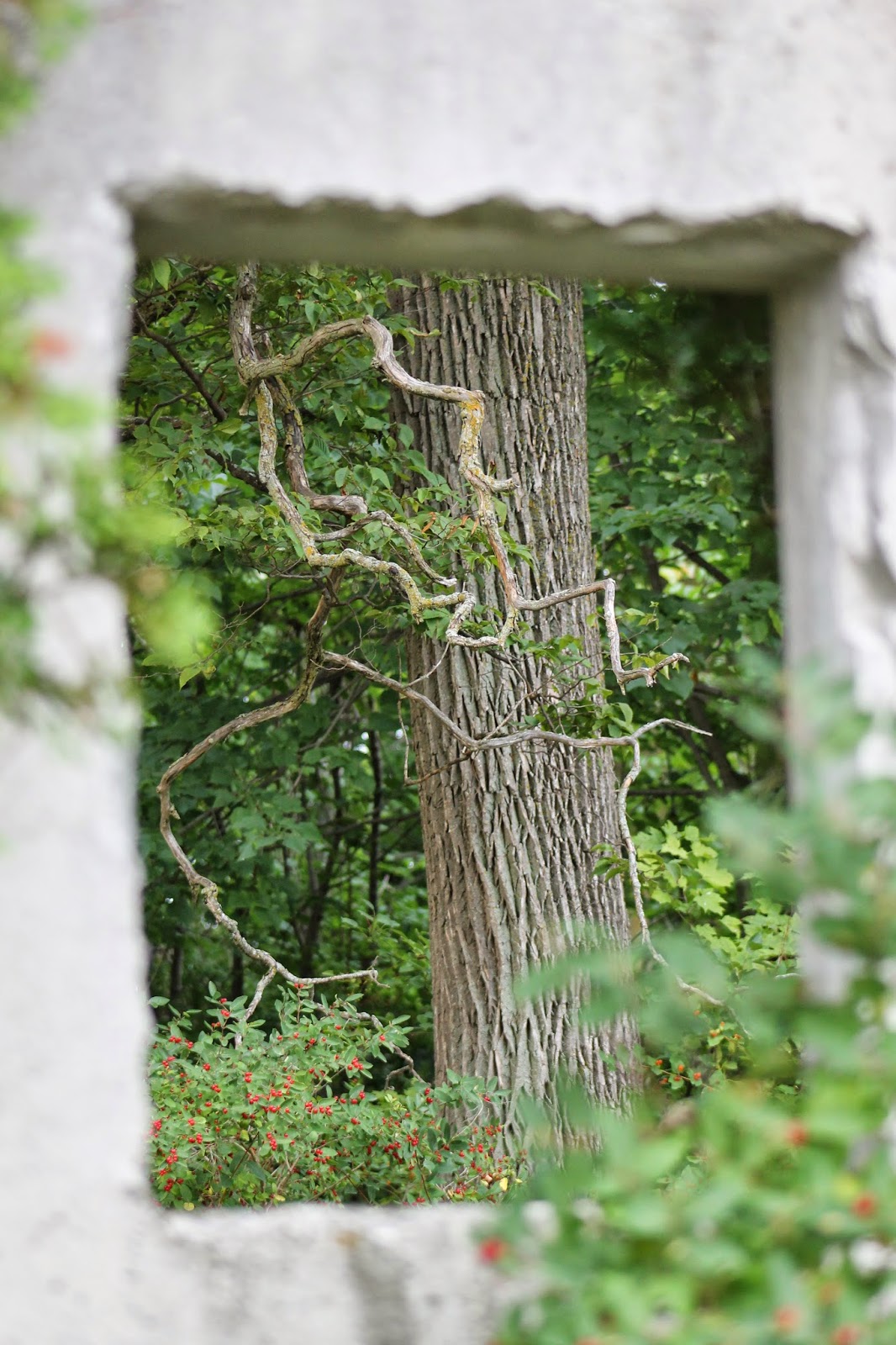 The tomb of the founder of The Association and the town of St. Nazianz, Father Ambrose Oschwald. He was known as a great healer. 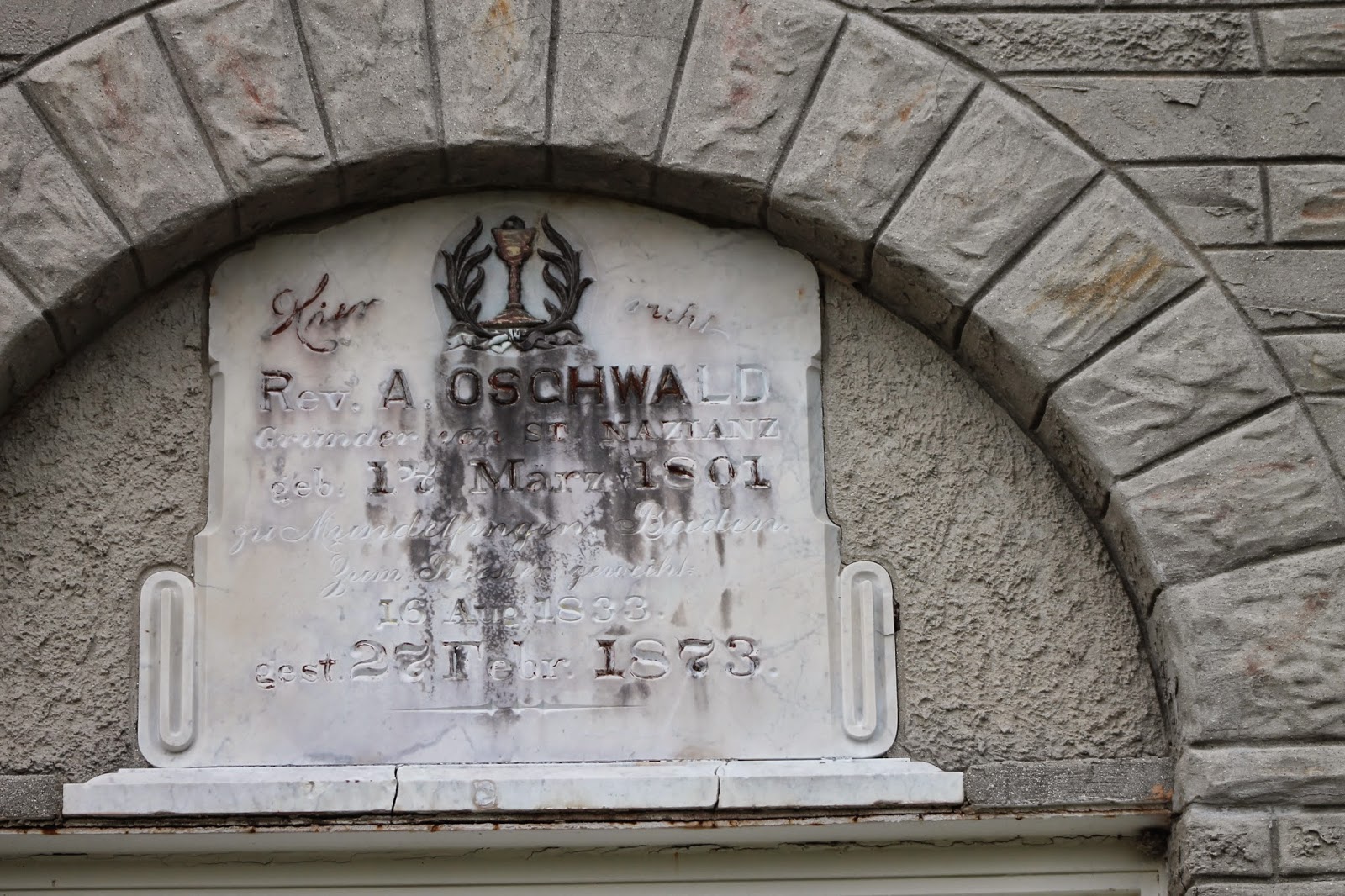 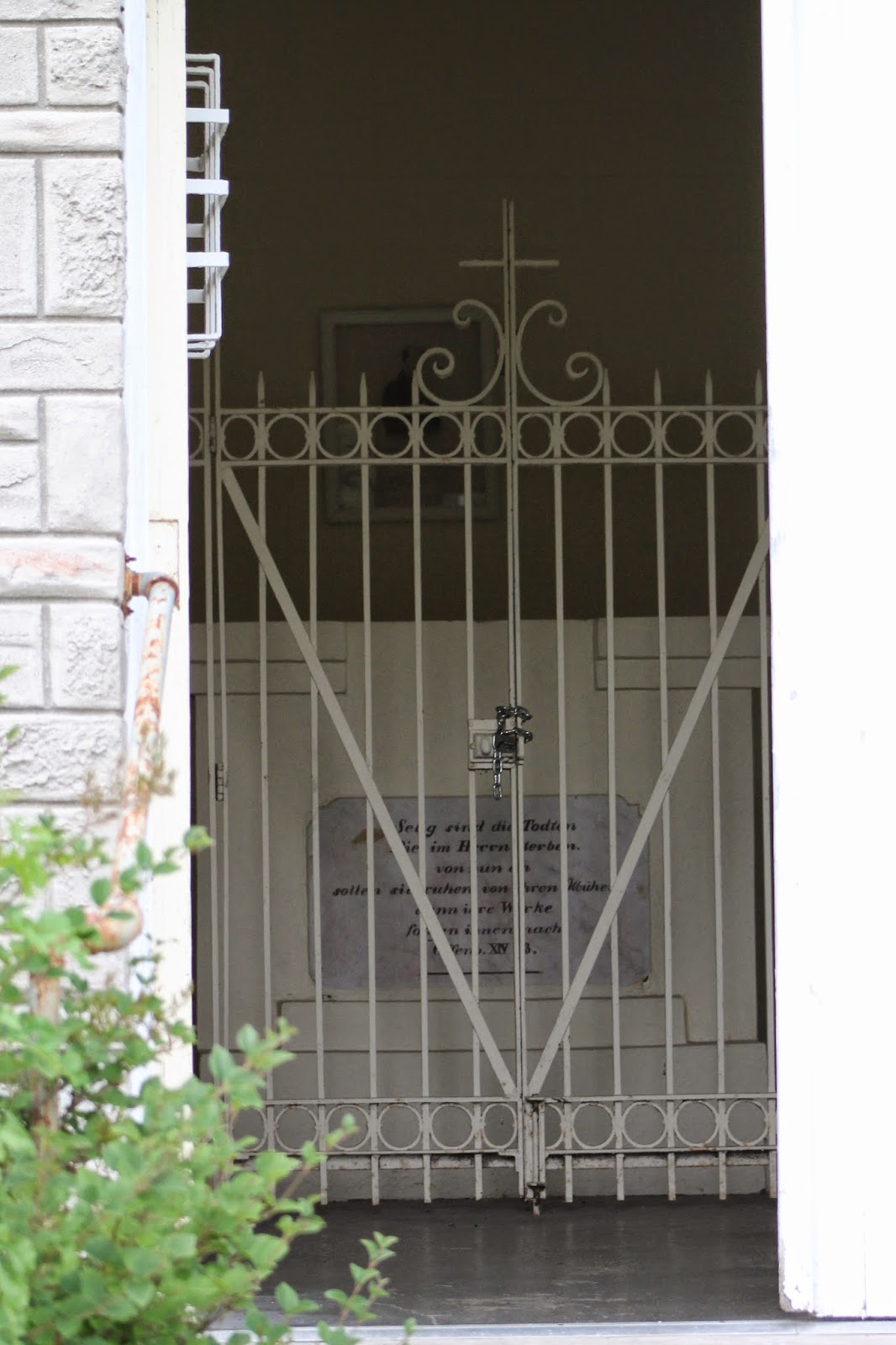 From inside a little chapel located upon a hill looking down upon the cemetery. 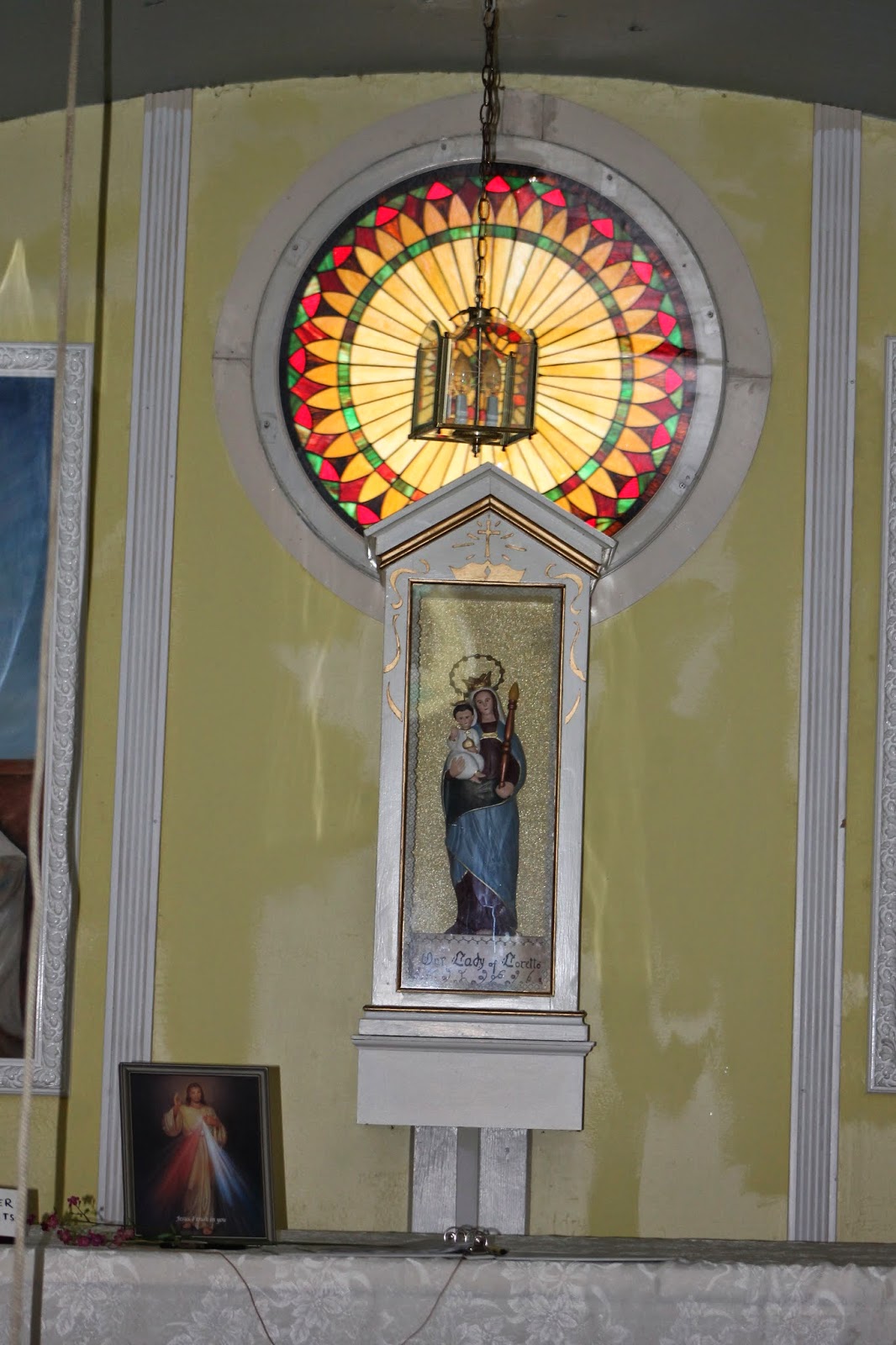 Father Ambrose Oschwald, who led his entire congregation from Germany to Wisconsin in 1984. Looking down from the hill of the chapel 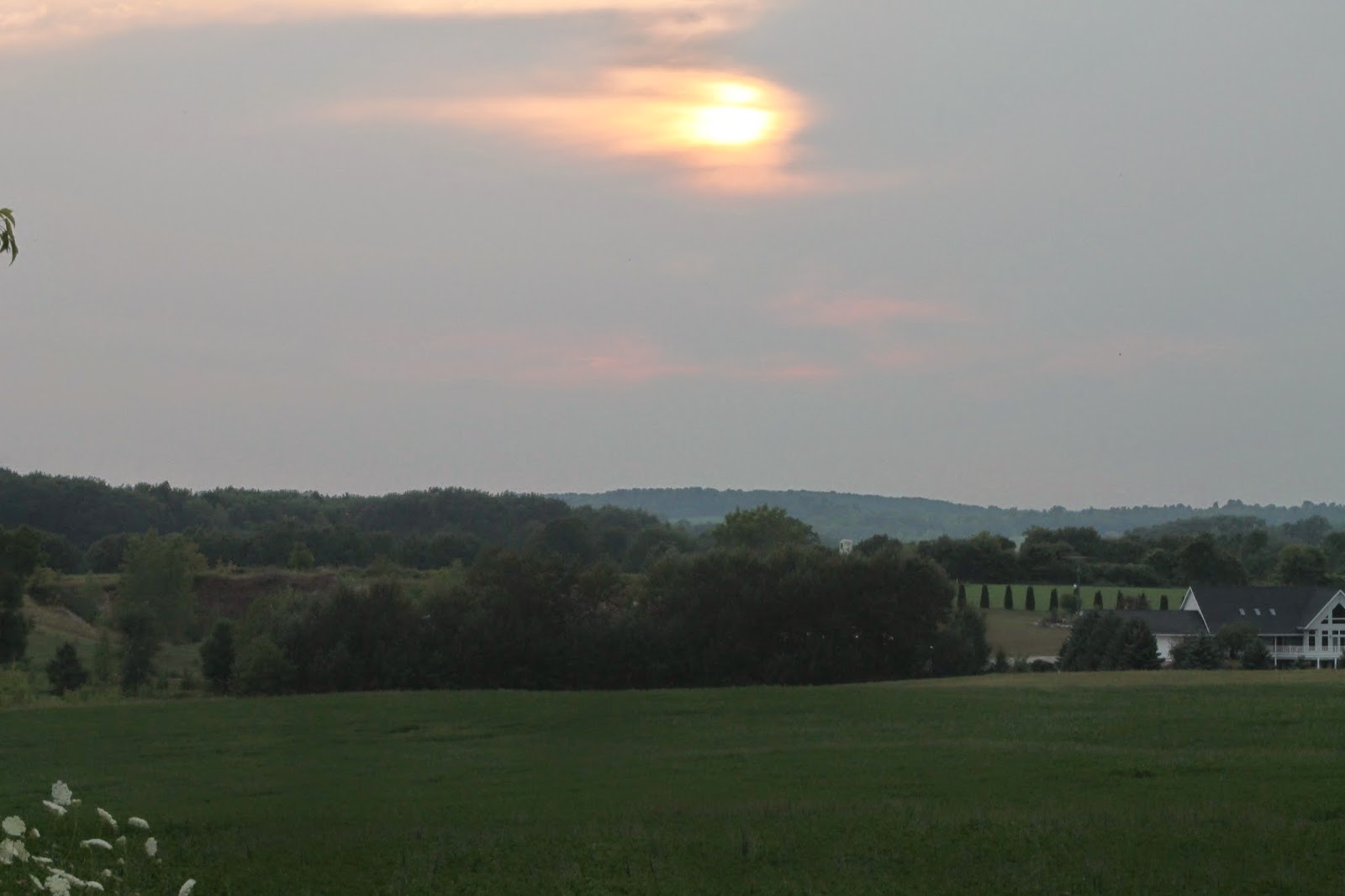 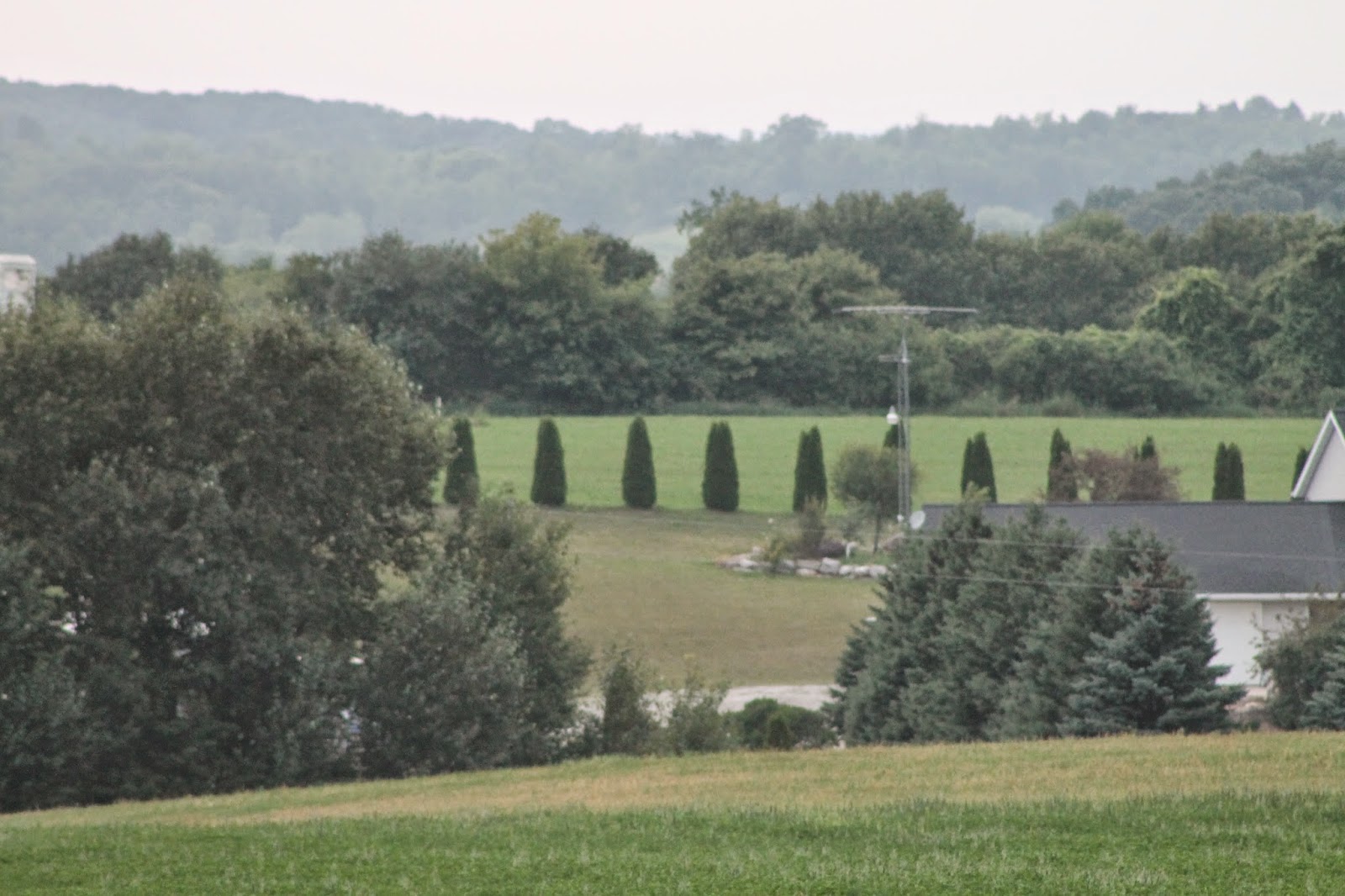 A path leads along the property to a small lake or pond, which is more like a bog at this point. 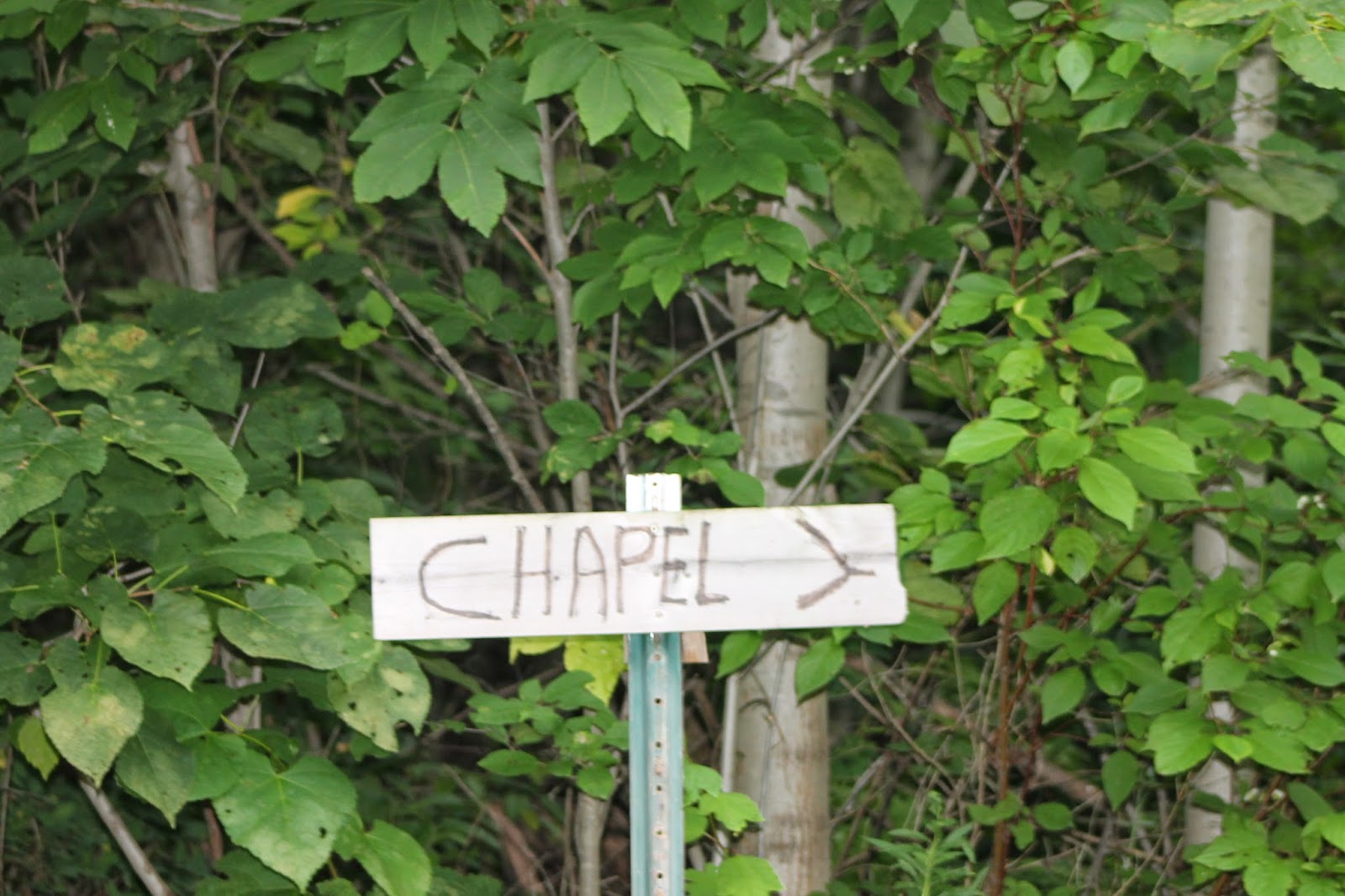 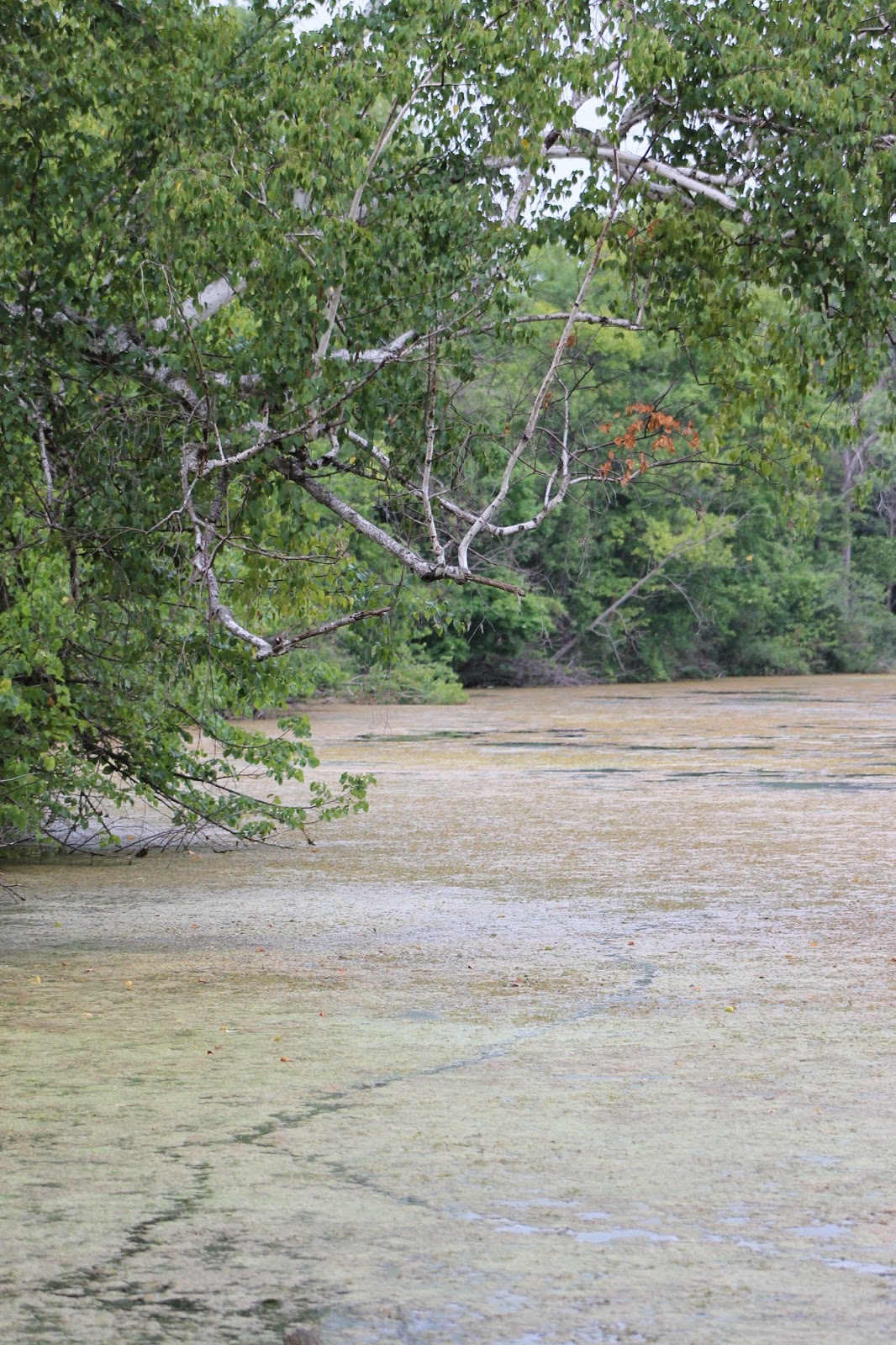 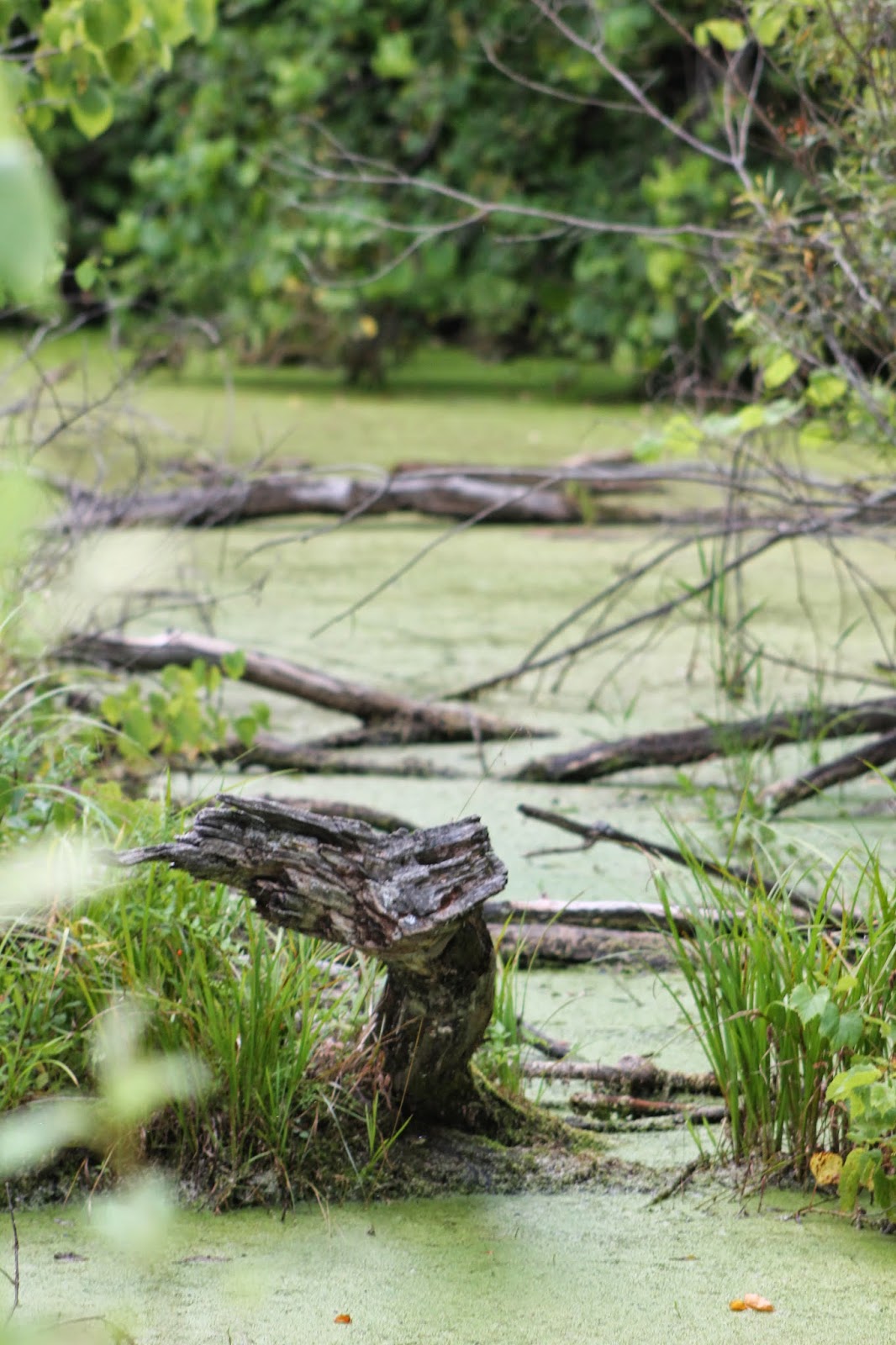 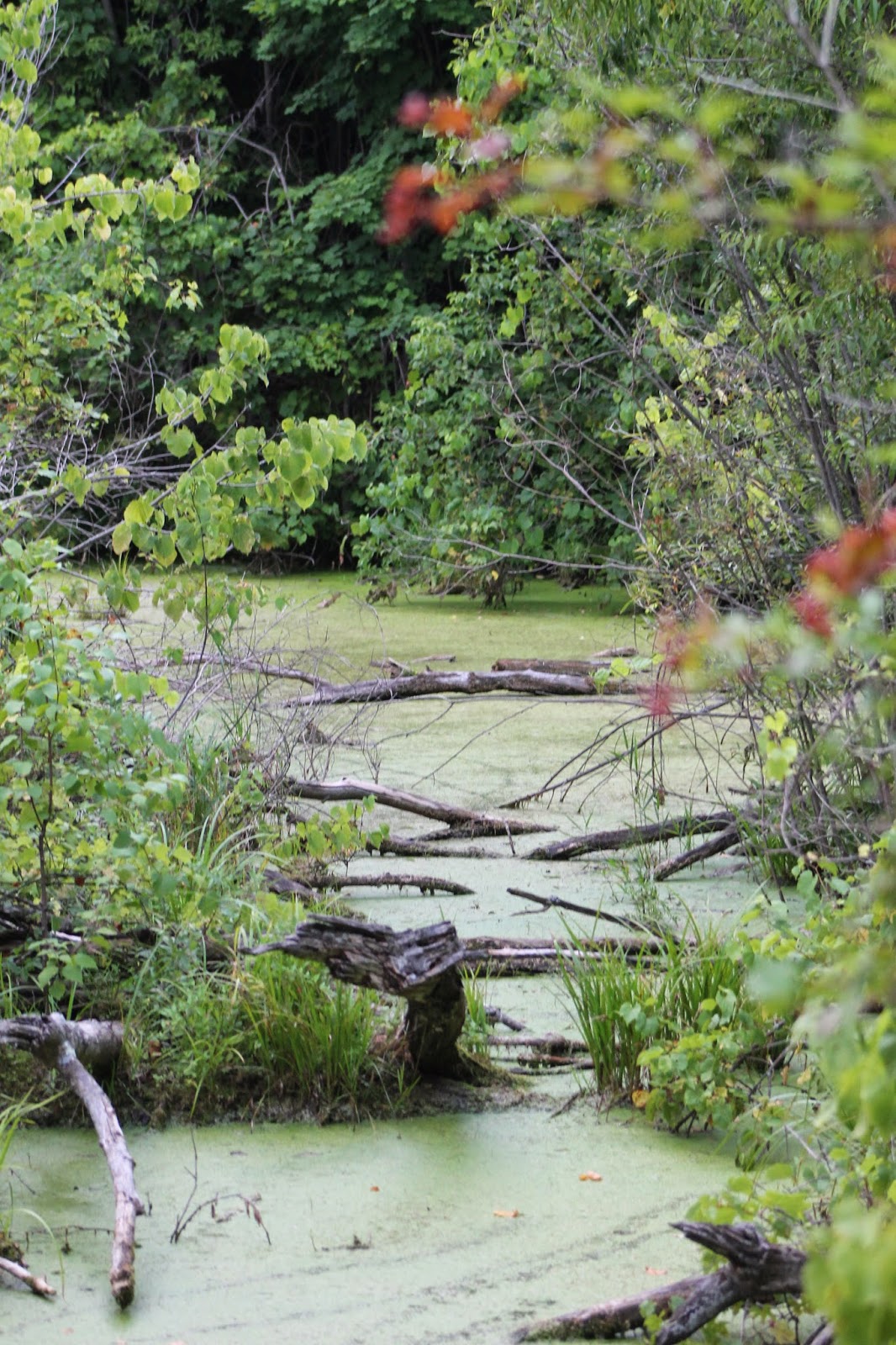 I'm not sure what the intention of this little monument was: 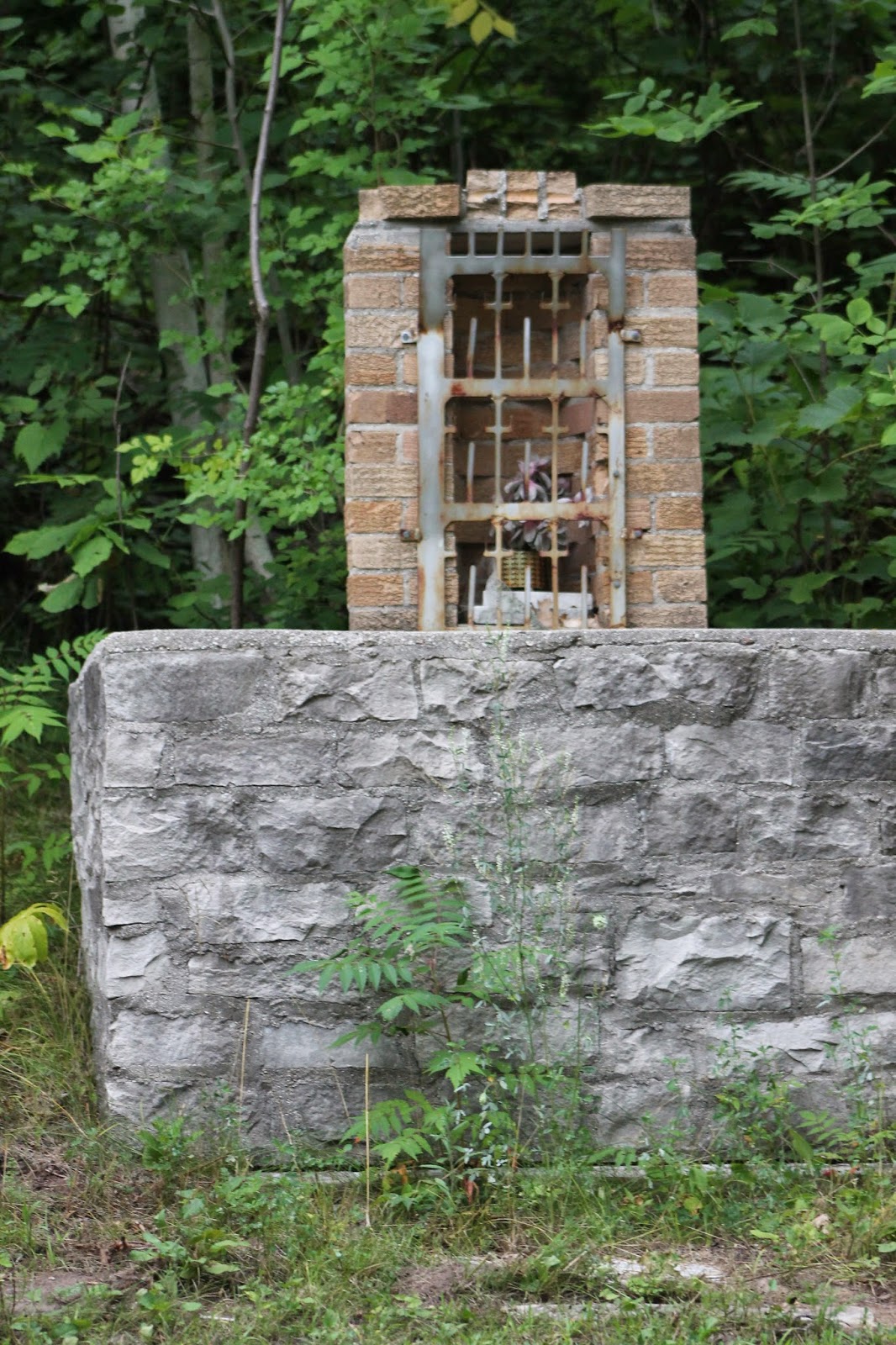 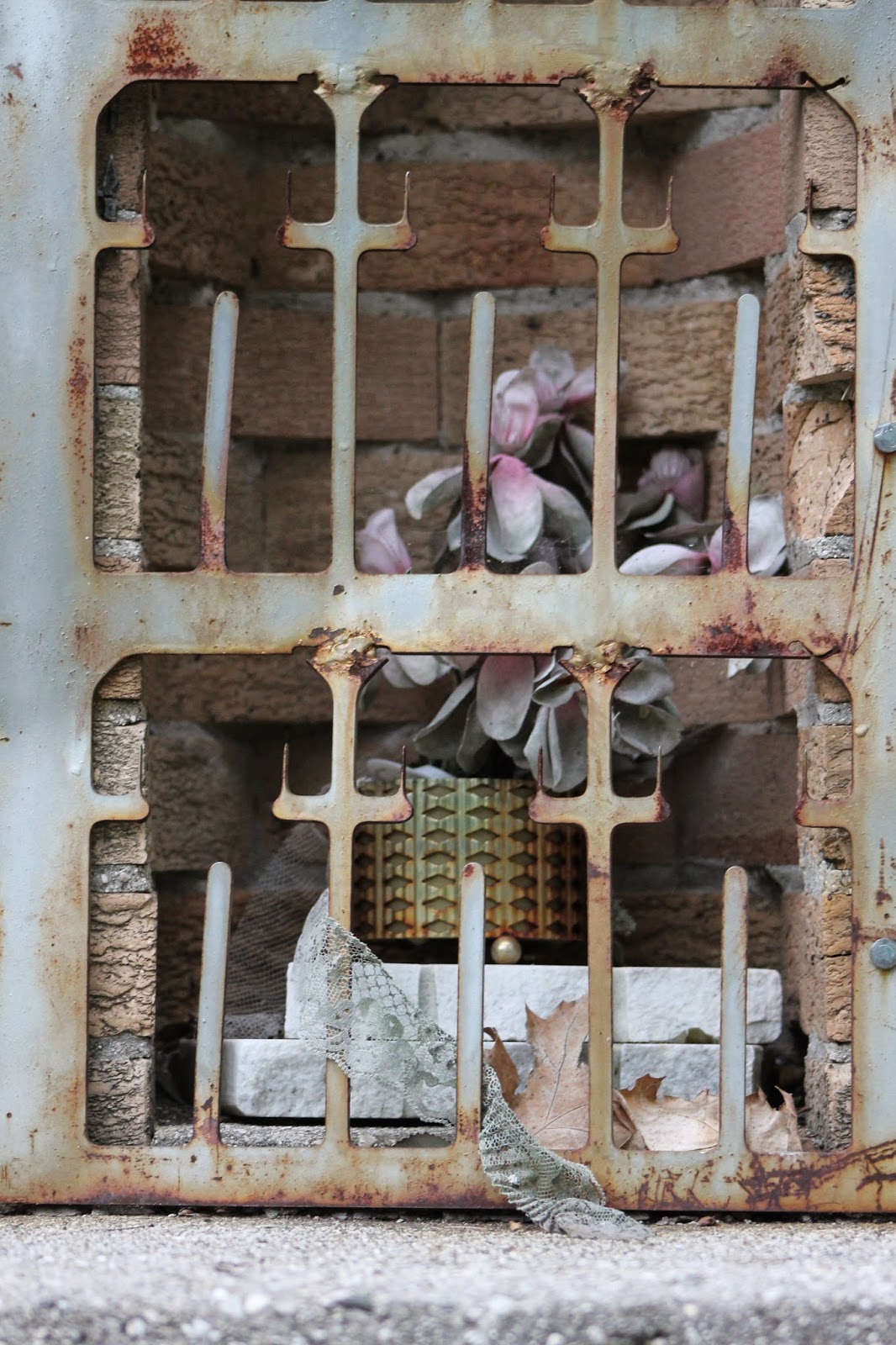 Pictures of the grounds from across the waters. 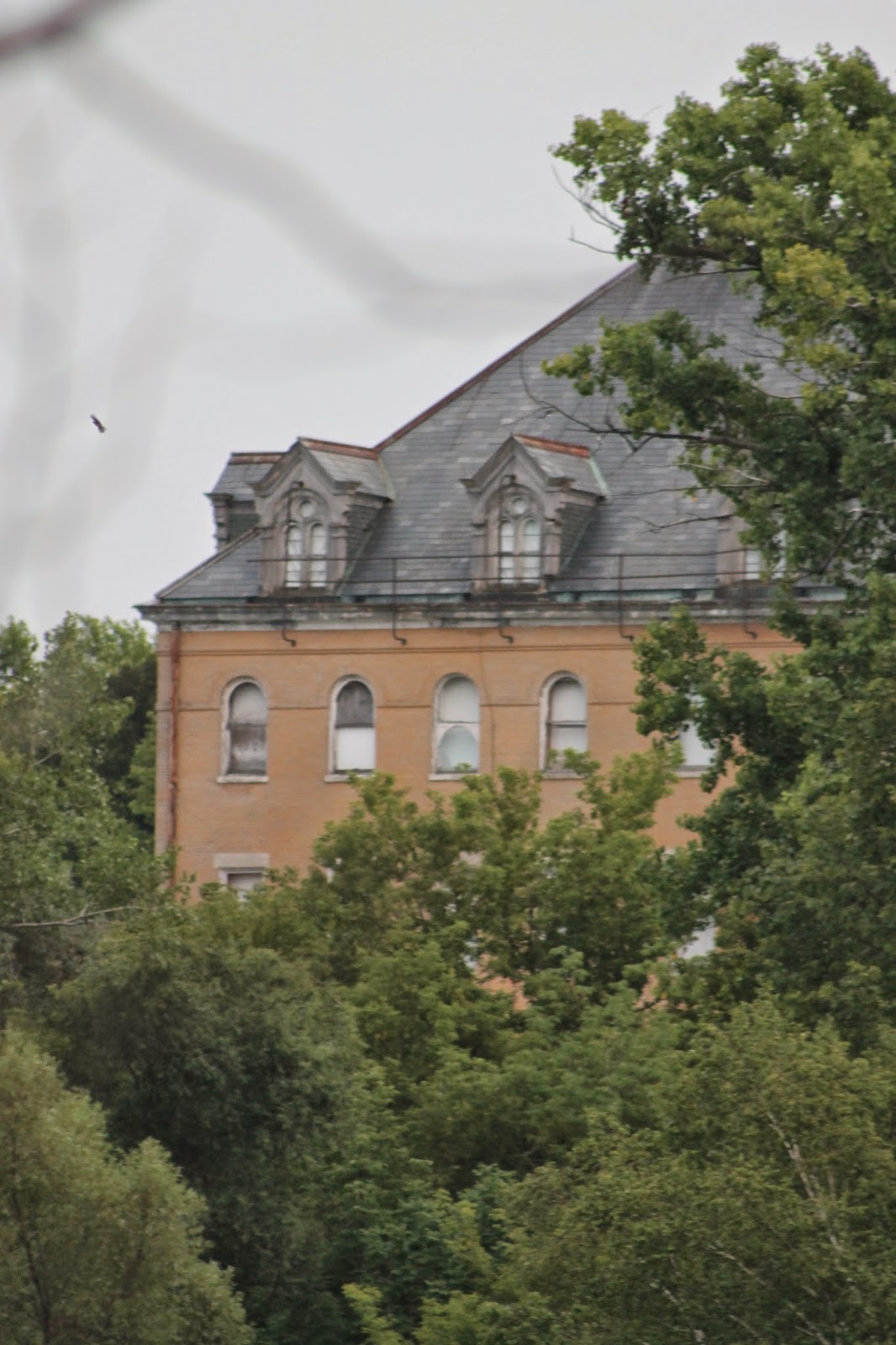 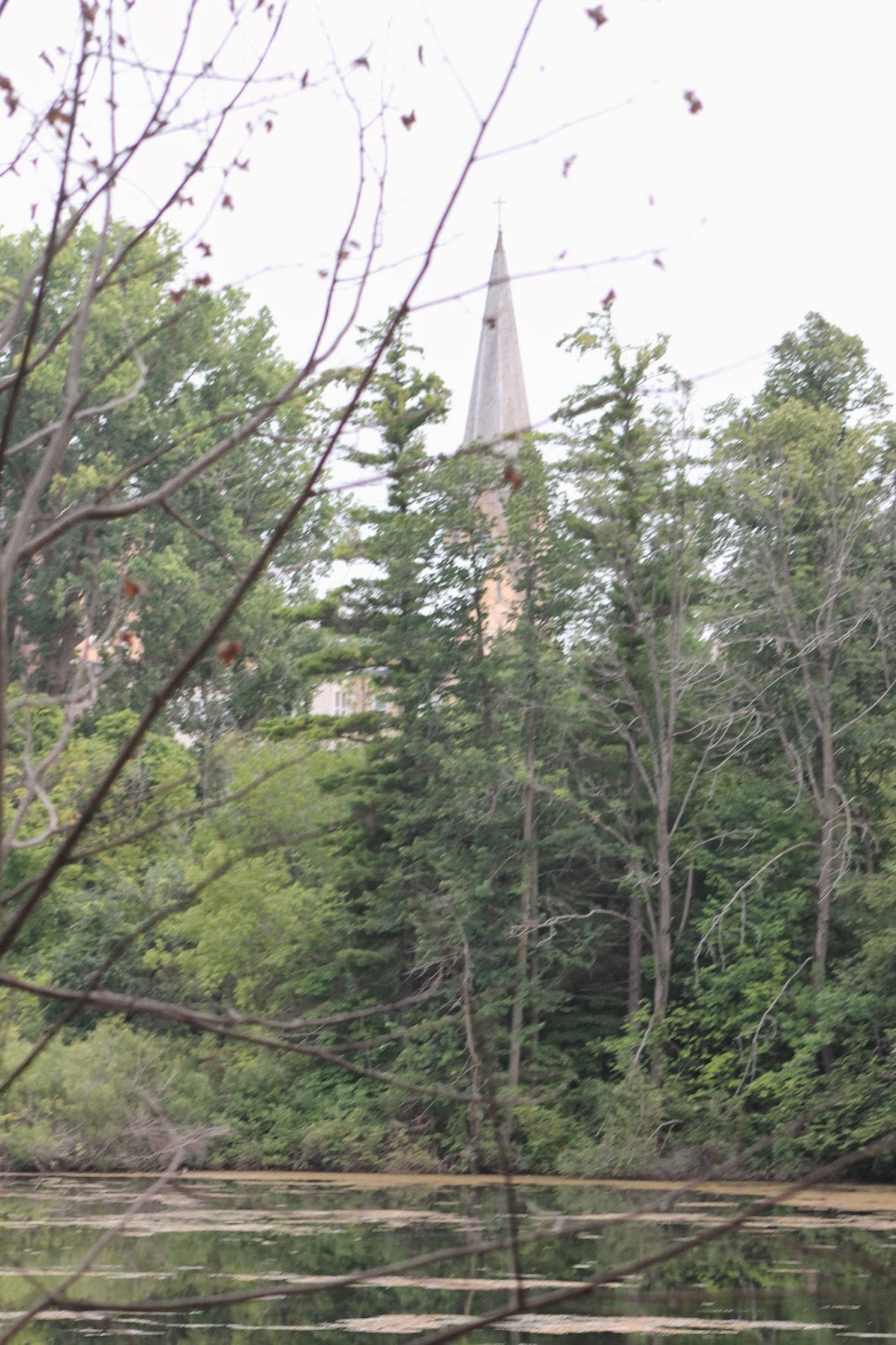 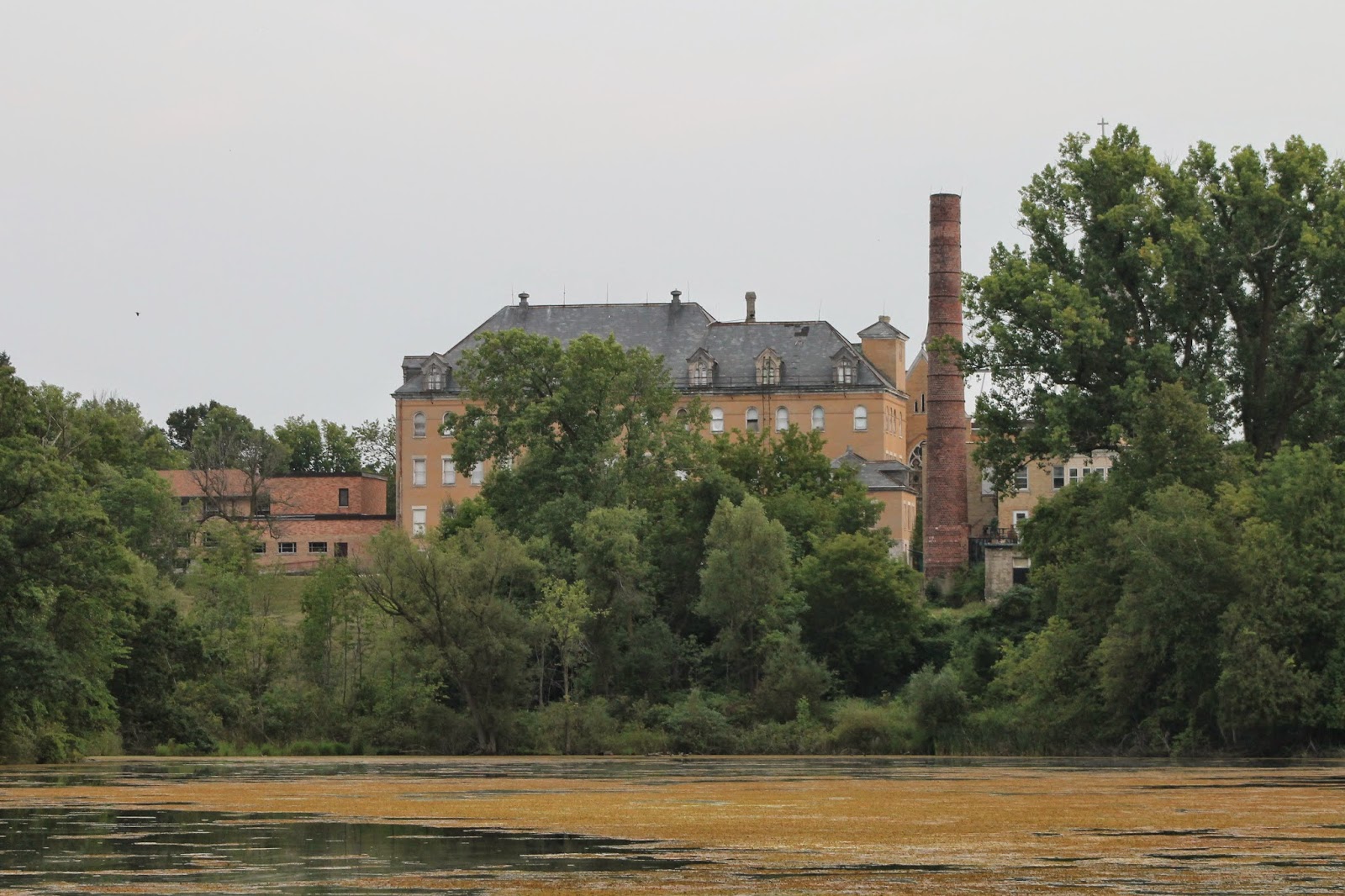 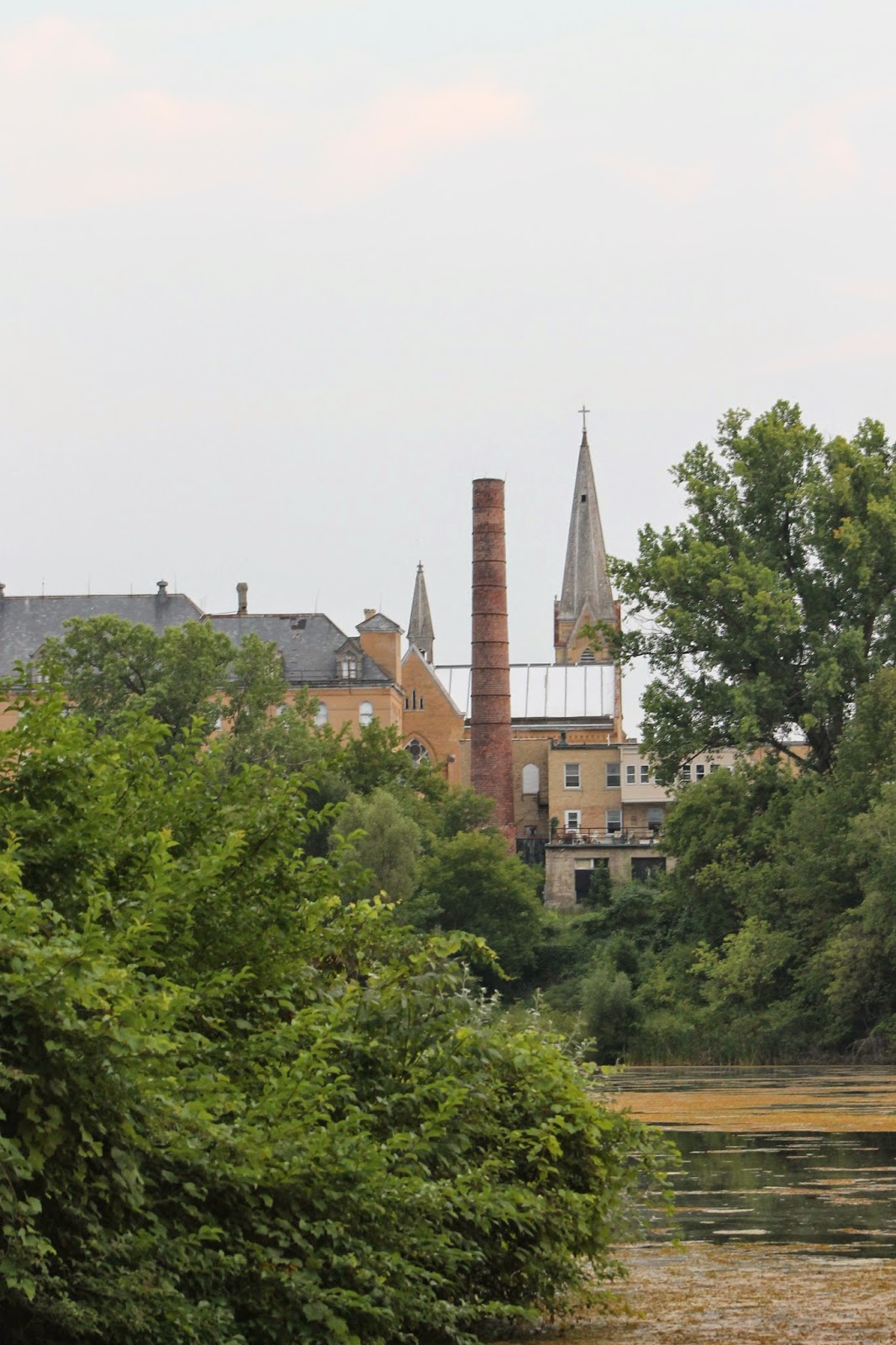 A creature we encountered on our walk. The look in its eyes suggests possession or perhaps a were-bunny. 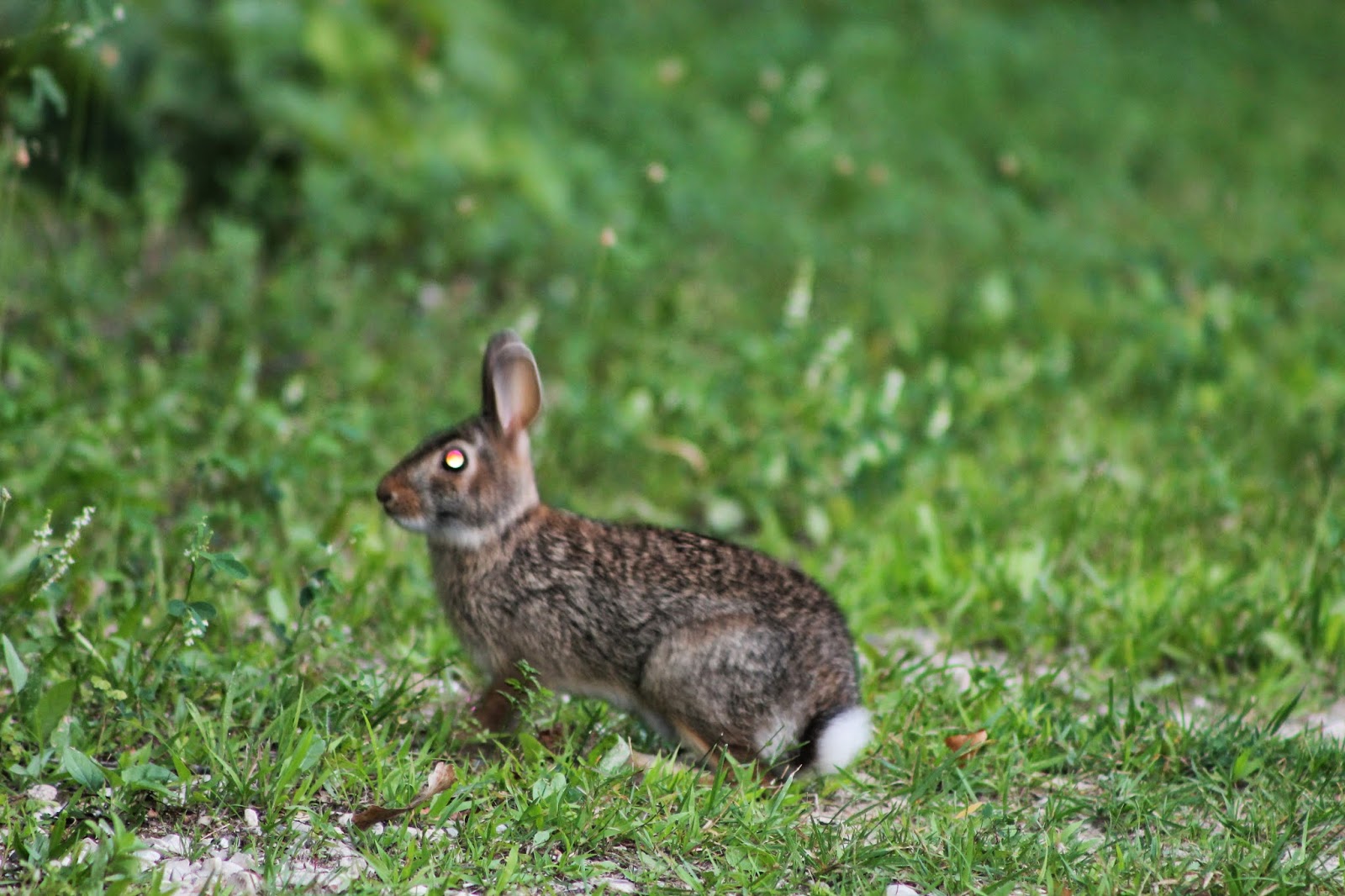 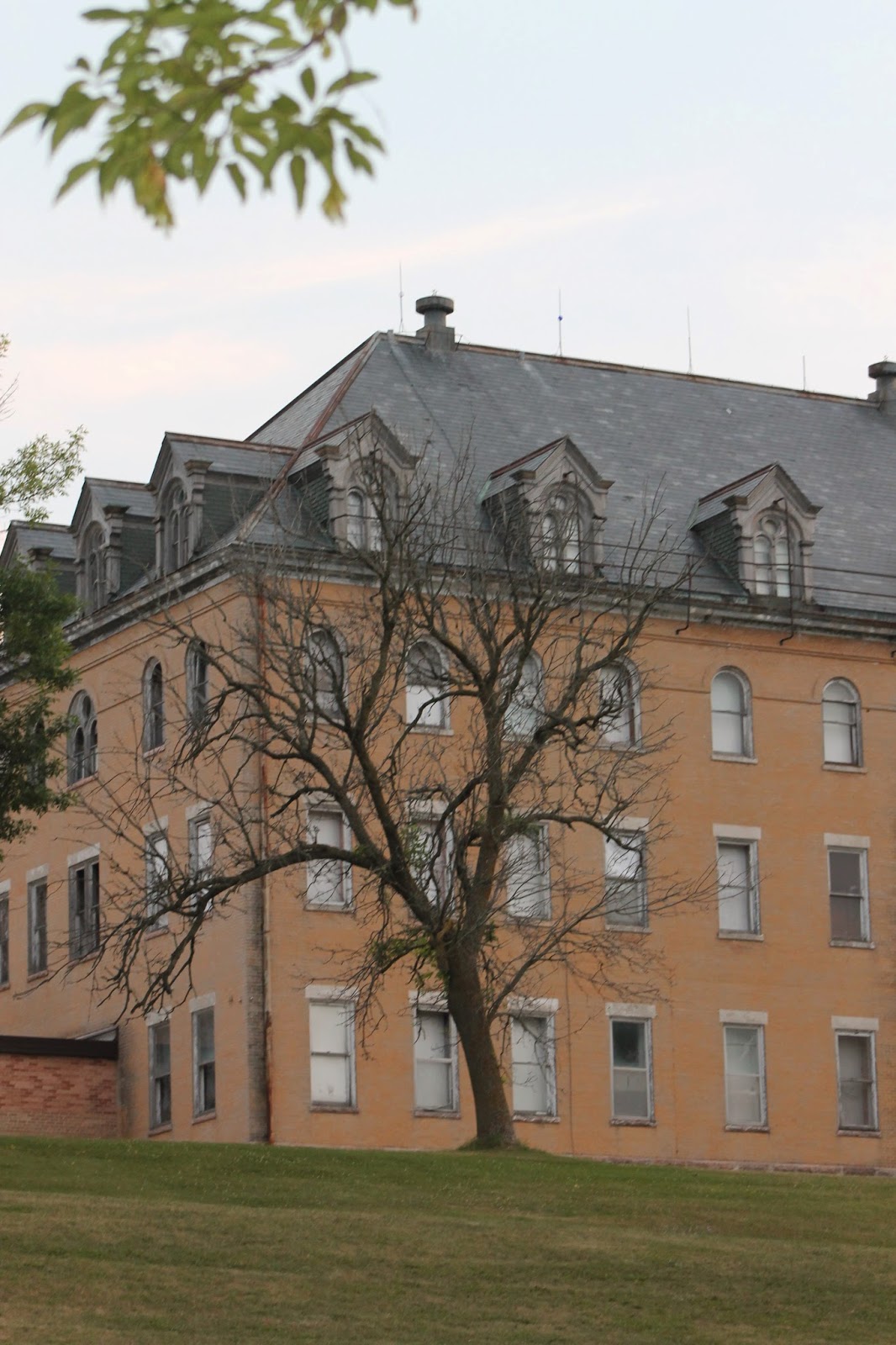 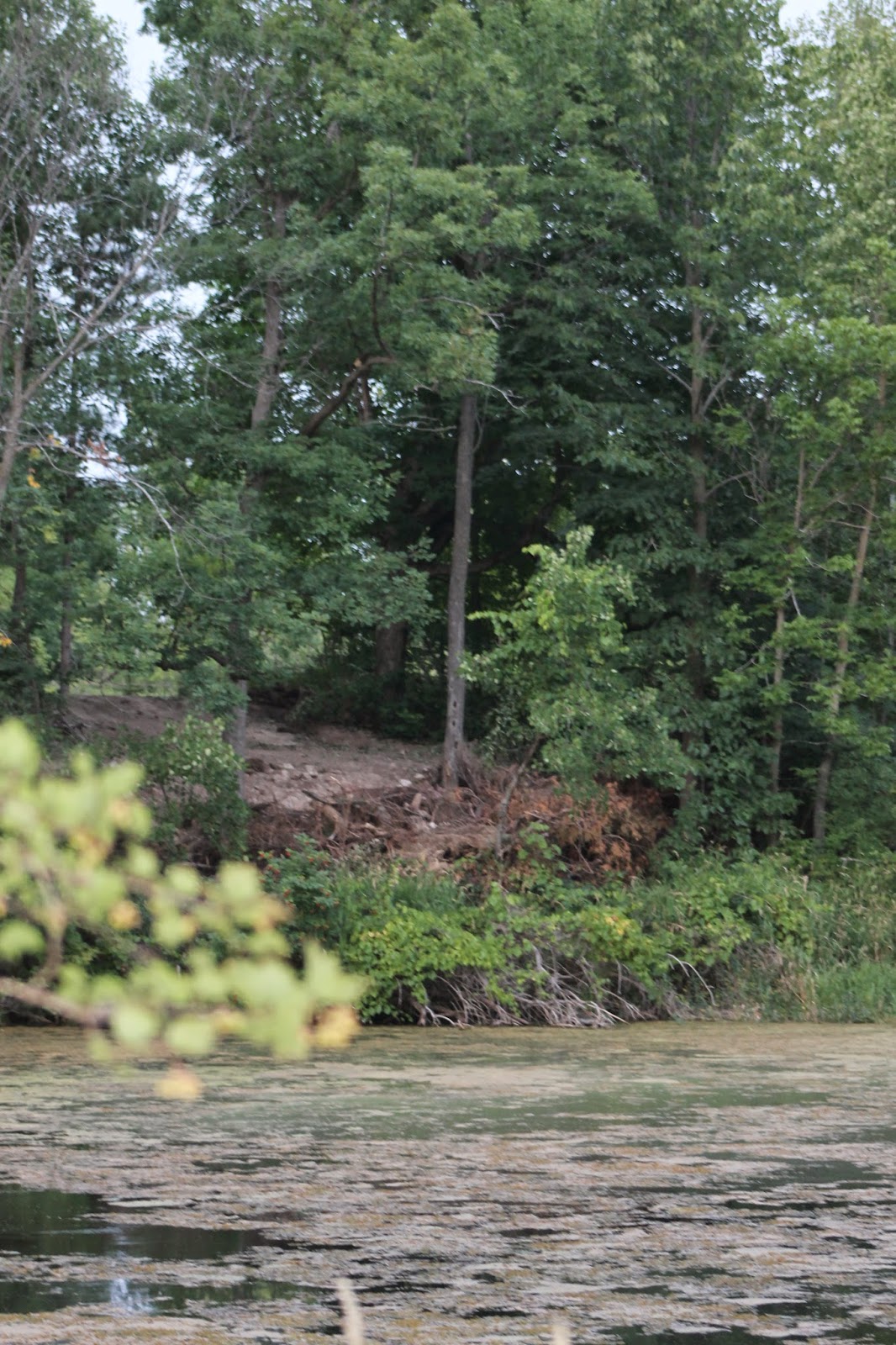 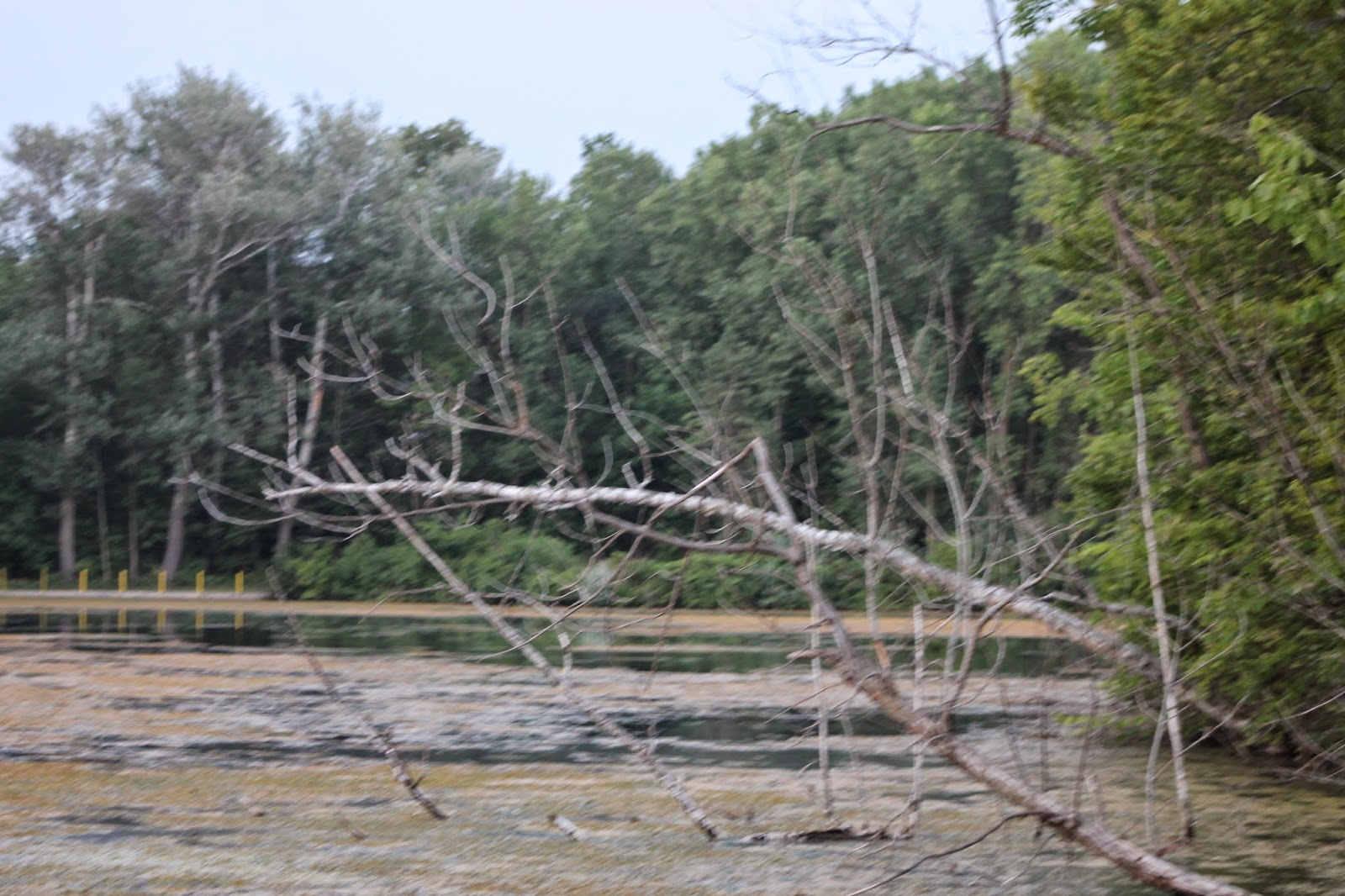 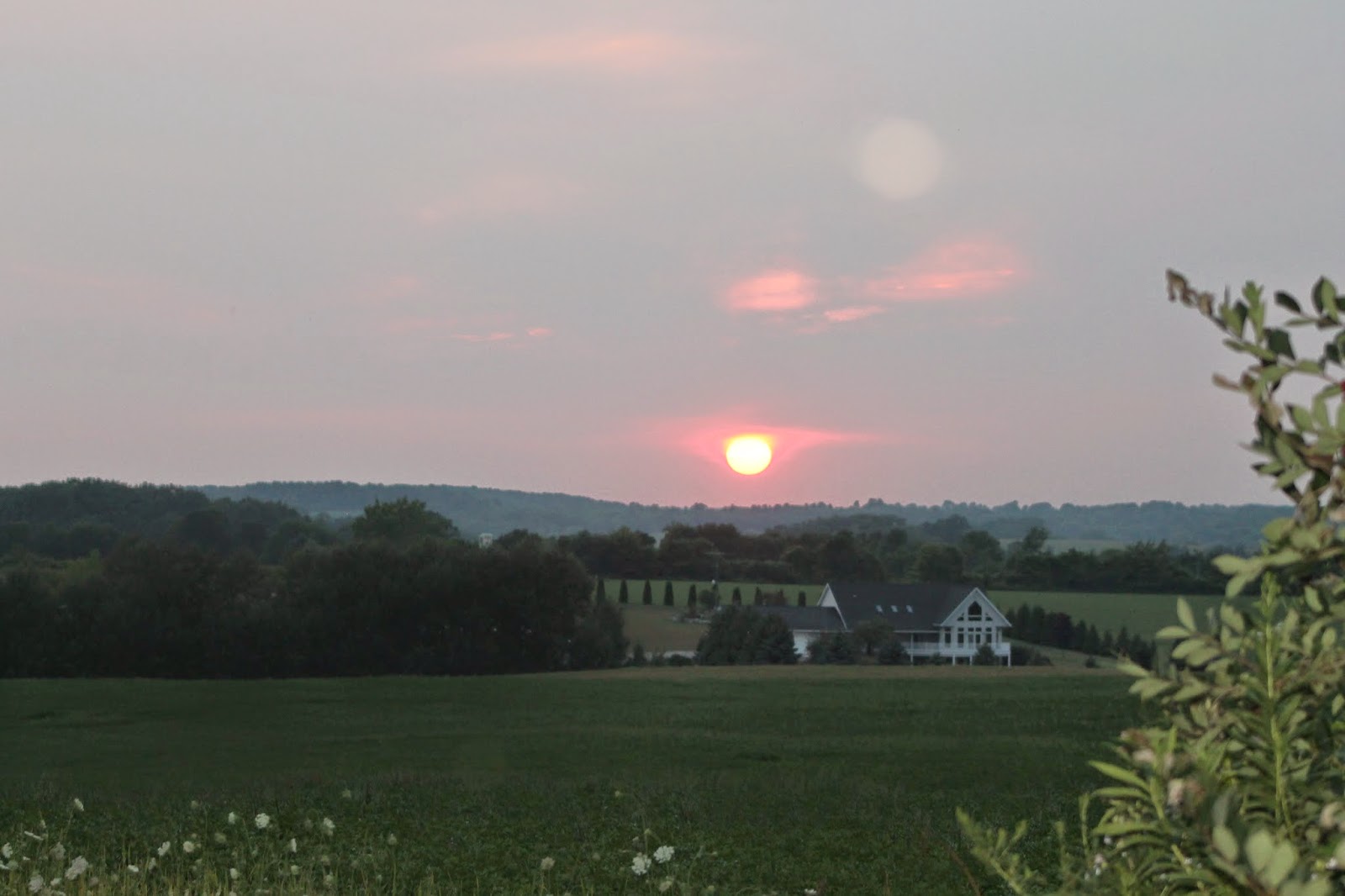 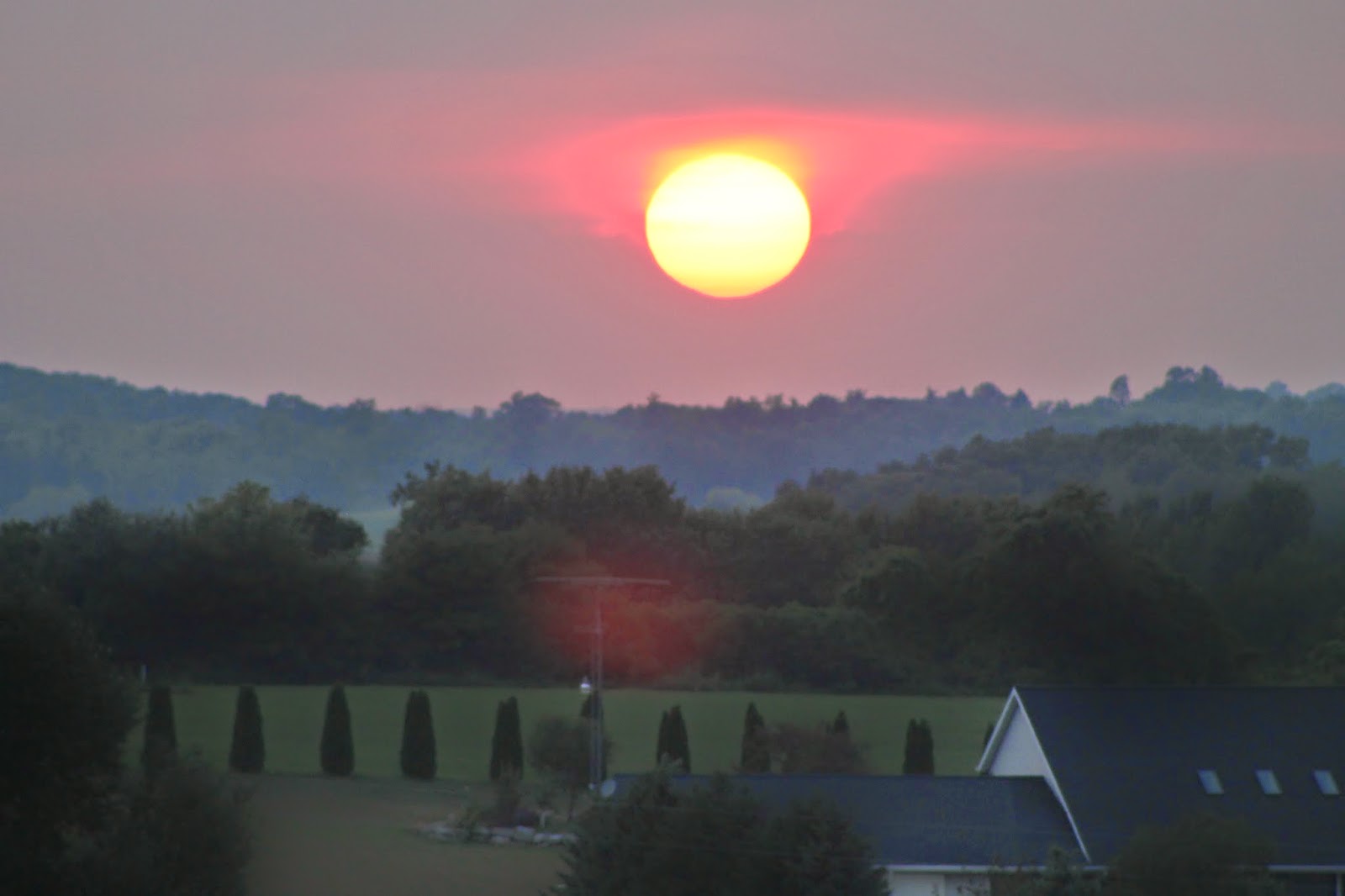 I like the idea of one tombstone being out of step with all the others. Again, just letting my imagination run free (as with the bunny). 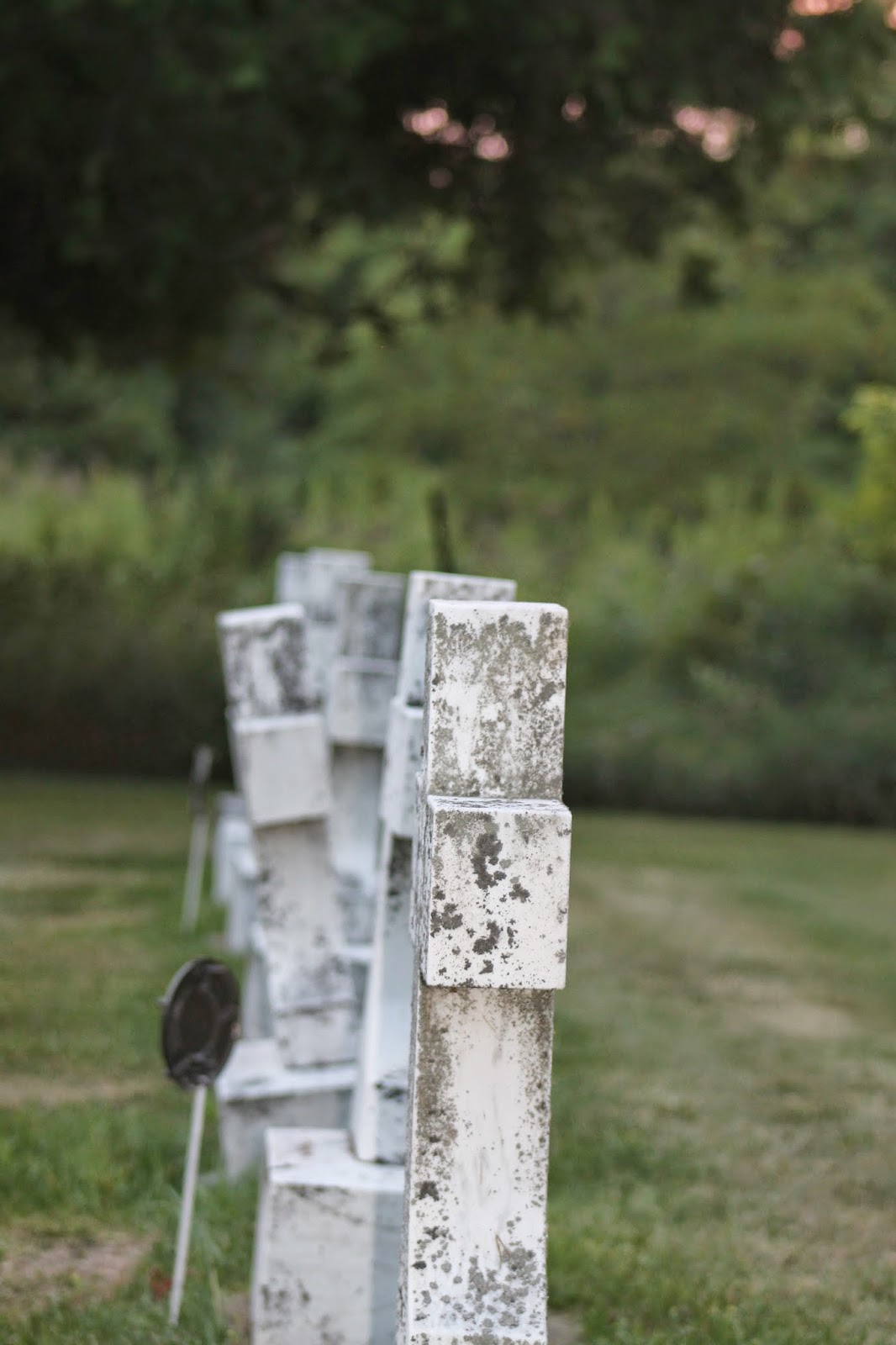 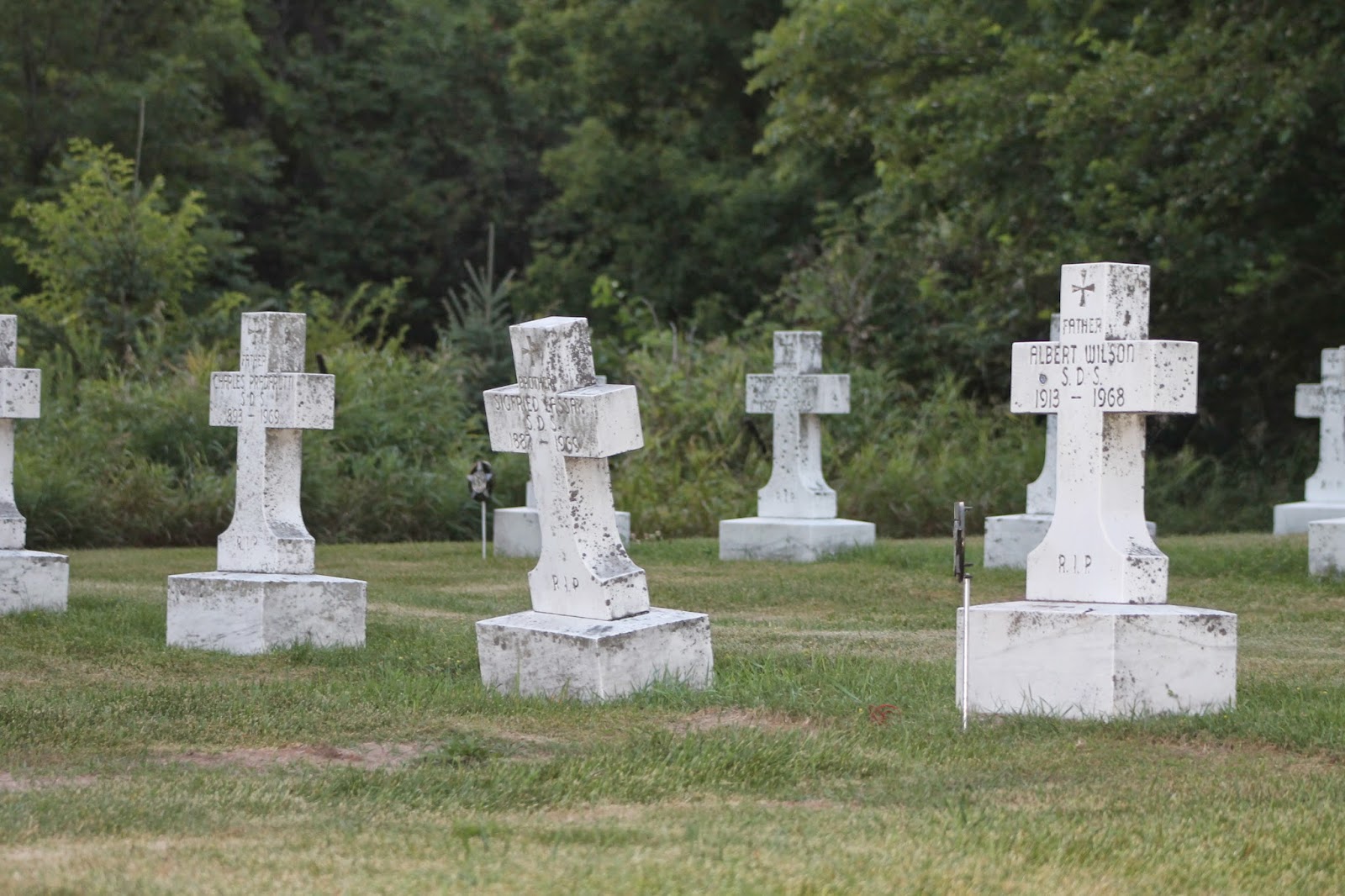 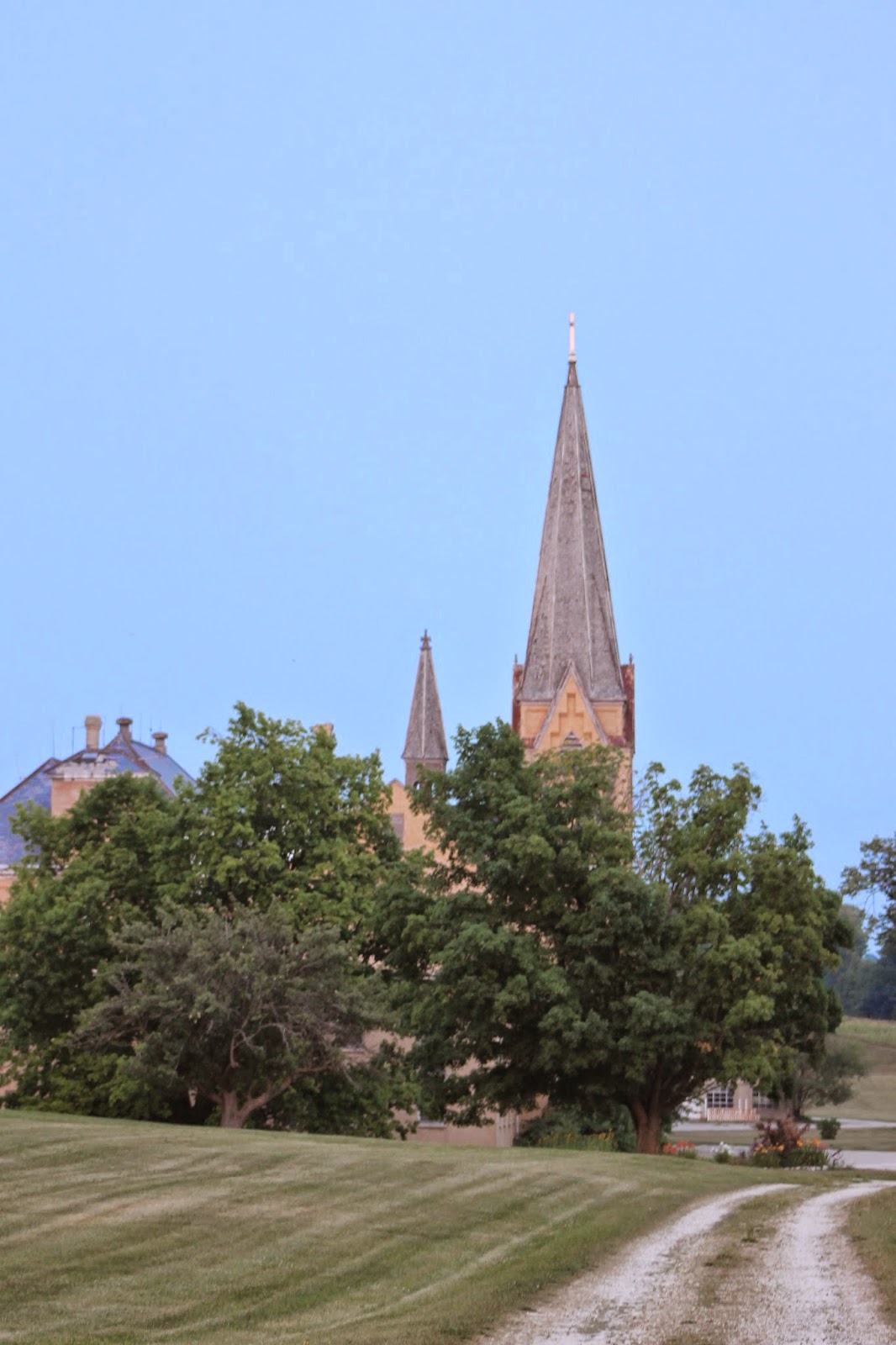 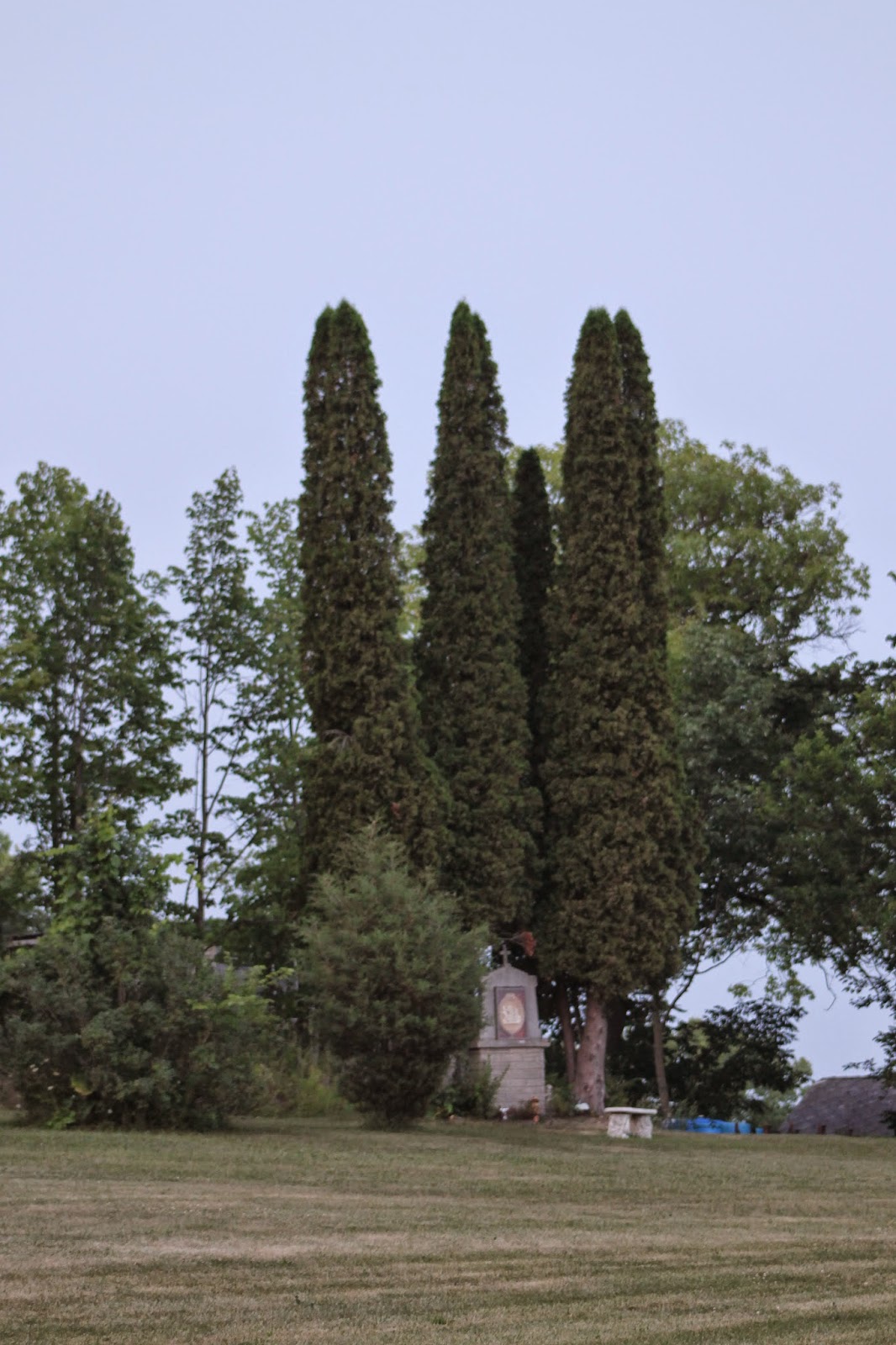 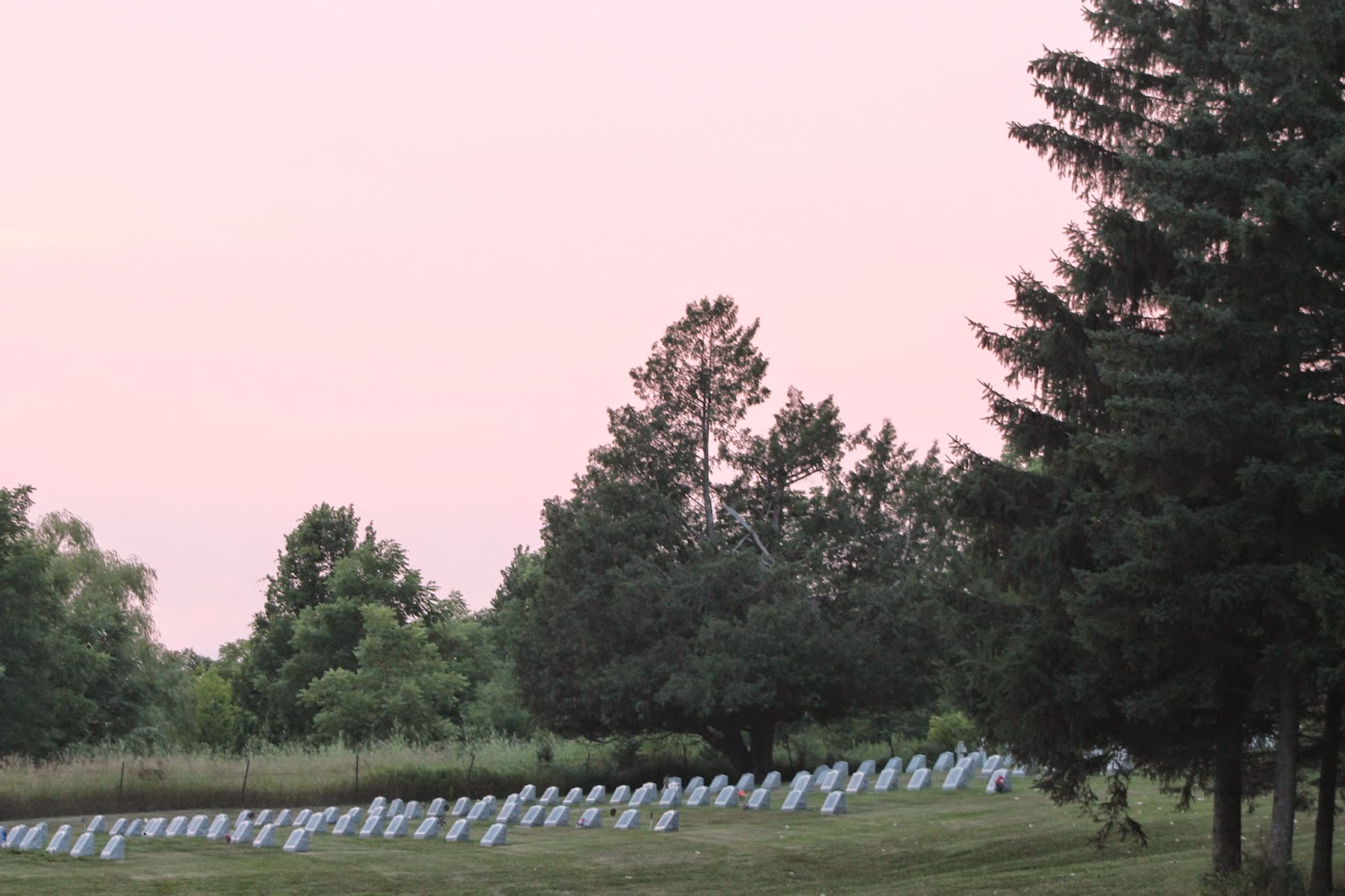 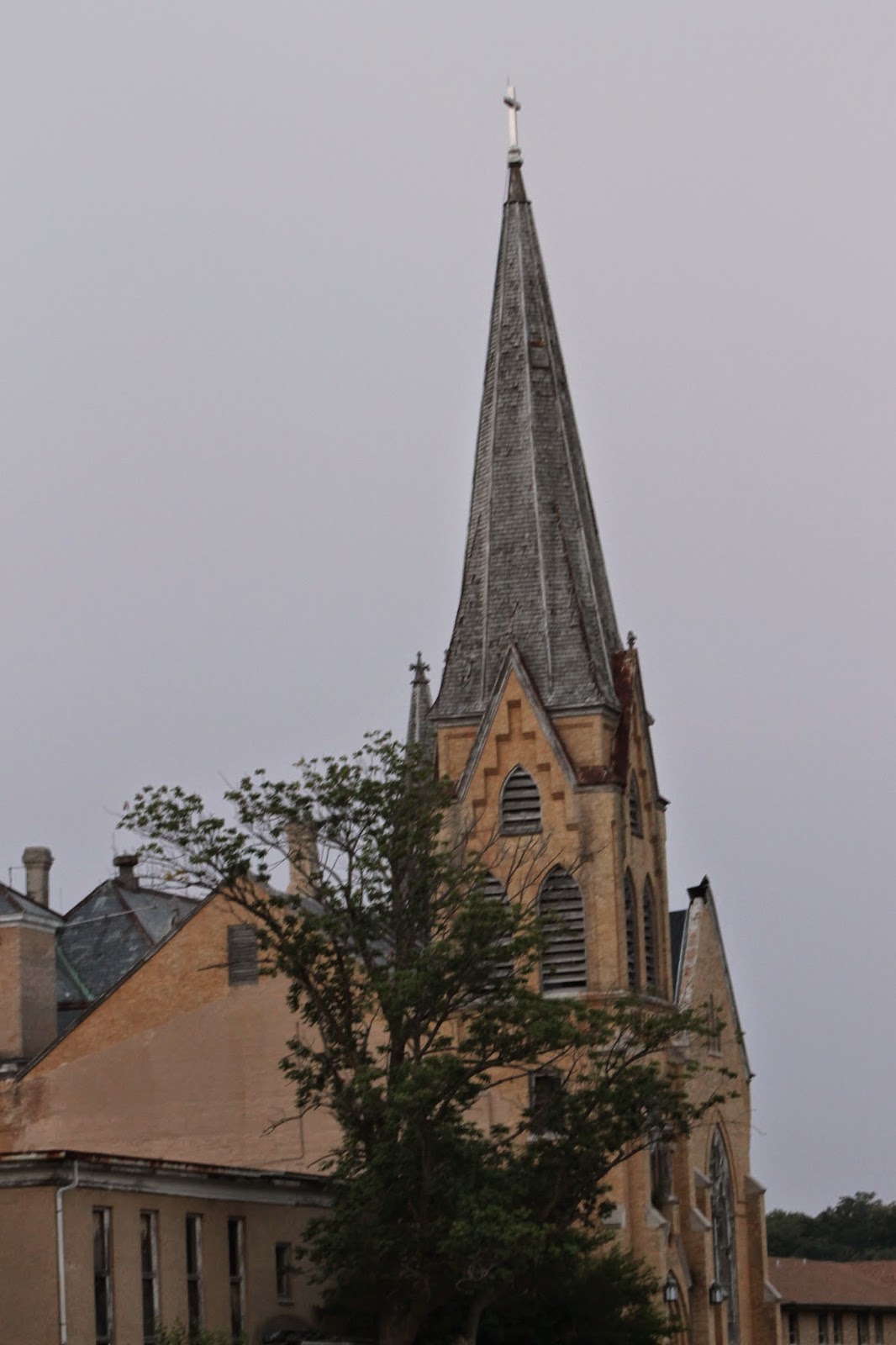 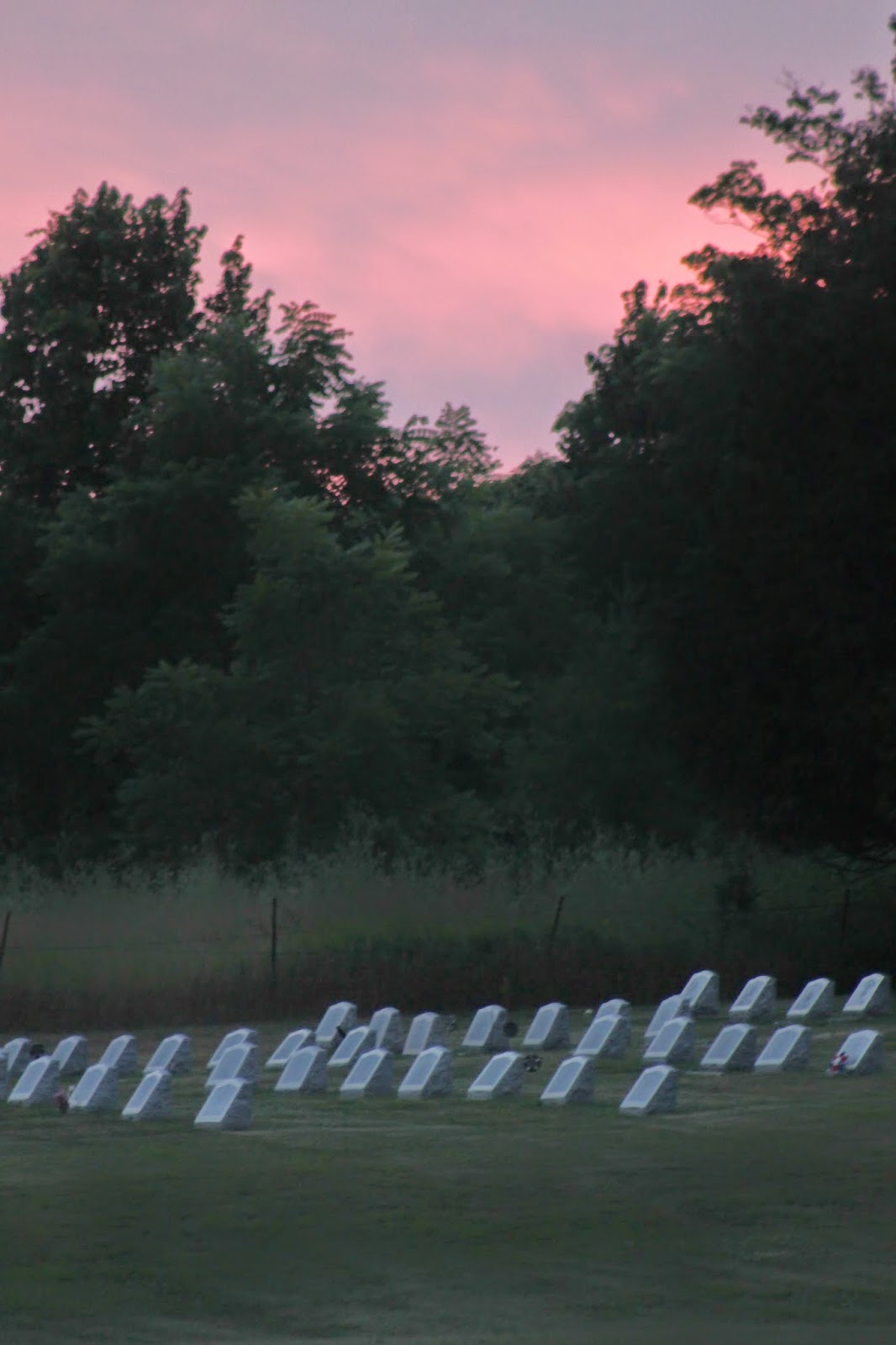 The mind invests meaning to what it encounters, that's what it does. I allowed my mind to work its own ideas upon what it witnessed at JFK Prep, and the result is my novel The Association, which shall be available sometime in September. If the waiting gets to be too much for you, feel free to check out my first two books in the series while you wait. The first one's on me.

Posted by James Rozoff at 7:35 PM No comments:

Moments Of Profound Understanding In Movies

On a forum long ago and far away, I once posted what to me were some of the greatest moments in cinematic history. It was only after posting these four clips in succession that I found a common link to them and felt the need to write about it. Let me know what you think:

After all, what possible connection could there be between The Karate Kid and a romantic comedy by Charlie Chaplin, what would link Victor Hugo’s 19th century work with a film about aliens secretly infiltrating and controlling our society? Had I not included a comment someone made on YouTube regarding They Live, I would not now try to convince anyone that any connection exists. After all, the clip I included is a fight scene, the one that inspired the “cripple fight” from South Park. The movie stars Rowdy Roddy Piper, the professional wrestler. It includes lines like: “I’m here to kick ass and chew bubble gum…and I’m all out of bubble gum.” Nothing very profound here, right? But the reference to Plato’s Republic got me thinking.
Plato stated that most people’s perception of reality is akin to “cave dwellers” who merely see the reflections of the real, shadows cast upon the cave walls. If one of them were to leave the cave and see things in the light of the sun, he would initially be blinded and confused. Furthermore, if that person were to return to the cave and tell others what he saw in the daylight, they would consider his vision madness. This is the story related in They Live, where special glasses reveal the subliminal messages that are to be found everywhere: “Watch T.V.”, “Do Not Question Authority”, “Consume”. In the clip I included, Piper’s character has returned to the cave to tell others of his revelation, while Keith David’s character thinks him crazy. And like anyone else comfortable in his misconceptions, he is willing to fight for them.

In the Karate Kid, Daniel’s patience, trust, and desire are tested. Acting on faith and need, he puts up with the endless tasks Mr. Miyagi assigns him until he is fed up. He does not see Mr. Miyagi’s ultimate aim, and so he feels he is being used. Even when the meaning of his work has been revealed, it will take some time for the reality of it to sink in.

The flower girl from Chaplin’s City Lights also perceives reality as something other than what it is. She awaits her prince charming, the rich man that Chaplain’s Tramp has pretended to be. Since undergoing an operation that has restored her sight, she is on the lookout for the dapper millionaire who paid for the operation. When she sees the Tramp, she looks upon him with condescending pity, neither aware that it is he who gave her the money, nor the personal cost of his generosity.

Jean Valjean is an ex-convict who has been taught throughout his life that power and law are the only truths. When the bishop opens his house to him and shows him compassion, he cannot begin to understand where this generosity is coming from. It has no place in the world he has known, and so he falls back into the only way of behaving that he knows: that of selfishness and violence. But when the bishop exemplifies for him the teachings of Christ (“When someone slaps you on one cheek, turn and give him the other; when someone takes your coat, let him have your shirt as well”), Valjean can never again see the world in the same way again. Before, he was an animal without free will. Now he is confronted with the choice between the bishop’s example and the world he has always known.

In each of these scenes, a person’s shallow misperceptions are shattered by an almost spiritual (or very spiritual) revelation. Arrogance and ignorance give way to humility and the beginning of wisdom. We are in an age where filmmakers can create an entire world (Avatar), or destroy one (2012). But nothing in cinema will ever impress me as much as the look in a character’s eyes as a world more profound and beautiful than any they had ever known begins to take shape before them.

Posted by James Rozoff at 6:07 PM No comments: