Here are 1,200 words I wrote tonight, fresh of the press. Totally unedited, so please don't mind whatever mistakes there might be.


A cannon sounded from somewhere far behind the German lines, the start of a bombardment to weaken the Allied lines. Soon a hundred other cannons echoed the first. And before the last was done the first was firing again. The bombardment would last an undetermined amount of time, a day or more. A sleepless twenty-four hour time where there was nothing to be done but endure.

It was a prelude to an attack. The goal was to soften them up, to destroy every bit of them they could, to blow up the barbed wire and machine gun posts that would hold up and cut down any charge. The bombing continued drowning out any other noise. There was nothing to do but listen to the explosions as they blasted earth that had already been blasted many times before, to pray if one could still believe in a God that listened to the prayers of soldiers.

Steve crawled into a small hole dug into the side of the trench, large enough only for one man. Each of them would be on his own now. There was nothing any of them could do to help another, save tend to their wounds should a shell fall too close.

It was times like this Steve prayed for courage. But his fear distanced him from any chance at real communion with either his own thoughts or feelings or some sense of an outer divinity. But he knew his prayers were merely a way to distract his thoughts from the reality around him. They were no different than the babbling of an inmate in an asylum, the repetition of empty phrases that were nevertheless useful in soothing his neuroses.

His prayers went absent-mindedly on as his mind disconnected from his surroundings. He was losing himself, cutting off the outside world in order to protect his mind from the fear that sought to overwhelm him. The bombs continued to fall but never did they establish any kind of rhythm, never did they fall when expected nor cease from falling when he felt he could take no more. Sometimes, as he sat in his dugout clutching his knees to his chest, he tried to will the bombs not to fall, as if he merely thought hard enough he could have some control over the world in which he was forced to live. He would pray and try to will away the destruction that always threatened horrors still worse than those he was living through.

But prayers and mental distractions could never keep away the dark thoughts for long.

He had seen bodies, too many to count, that had been near the spot where a shell came to earth. He had seen men, some he knew, lying lifeless, their bodies in contorted positions that might have been humorous had it not been so real. He had seen bits and pieces of men lying all about and it all seemed so arbitrary. How does a man’s arm get torn from his body and still look to be in good shape?
Other times a man could be killed by the mere force of a blast, so that he looks perfectly okay and yet something vital deep within has been stopped.

The thing was, the first time he had seen a man torn apart by an explosion it affected him viscerally. But now he had seen it so many times, it was only some new spin upon the standard death by explosion could make him react in the same way, and there were only so many different ways a man could be scattered by the force of an explosion or by shrapnel. The others, those who died in ways similar to those he had seen before, well their deaths just seemed to accumulate in his subconscious, never bothering to register in his conscious mind.

It was only in his dreams that he became aware of the dead he had no time to notice in his waking moments. In his sleep they were given his full attention. They haunted him, though he did not know why. He had not killed them, did not wish them ill. Perhaps it was that they were jealous that they had been taken while he yet lived. Perhaps, being dead, they knew things he did not know. Maybe they stayed with him because they knew he was destined to join them.

In calm moments, on leave away from the front, he knew such thoughts were nonsensical. But here at the front, there was no sense, there was only madness. The laws of the other world, the one he had known his entire life, did not apply here. And the world he learned of here was encroaching more and more upon that other life, making it less real. The two worlds could not both exist. There could not be a world of forests when his eyes stared at the cratered wasteland that separated the warring parties. He no longer remembered what a tree looked like with leaves on it, could only visualize charred stubs that reminded him of the blasted men who had passed through this way.

It would only be two days before he rotated out of the front lines, but it was quite realistic that he would not live that long. And so his entire world was a hole in the ground and the raining missiles that were sent to destroy and kill.

It just started. It only just started. It would go on even when the sun had set, would perhaps continue until the sun rose again. And then the soldiers would come, hoping to sweep away all that opposed them.

The whistling of a shell brought his mind out of his dark thoughts and into his dismal present. It was close. But not close enough to be a danger, he decided after a moment. The anxiety that had risen in him began to recede somewhat. He heard it fall to earth and explode with a violence that raked his nerves even though he knew he was physically safe. Each bomb that fell added to the anxiety that never left him, just as each bomb did some damage to the Allied lines, their ability to defend themselves when the attack began.

Hours into the bombardment, he began to feel a degree of numbness. It was the most he could hope for, that the terror eventually surrendered to a certain emptiness within him. He felt a great weariness, as though he might be unable to stand up should the need arise. The intensity was too much for a human to endure for long, so that the body began to shut down. It was only the missile that seemed to approach too closely that snapped him from his torpor.

The earth shook when a shell hit nearby. It was at such times that the dead earth seemed the victim of the living, that all it wanted to do was lie peacefully but was tortured by the living. It almost seemed a cosmic dance, wherein the living allowed the dead no peace, while the dead claimed more than its share of those who sought to disturb them. It was hard to choose a side, hard to know whether it was life or death who was the enemy. It was getting hard to know what side he was on, which he was fighting for.
Posted by James Rozoff at 6:23 PM No comments:

I haven't even finished the first draft for Shell Shock yet, but I've already got the cover, which I thought I'd share with you: 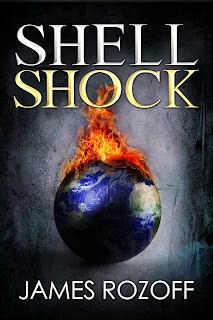 As you can see from the covers, Shell Shock is a sequel to my book Seven Stones. It's unmistakable by the design, though there is no overt reference to it. 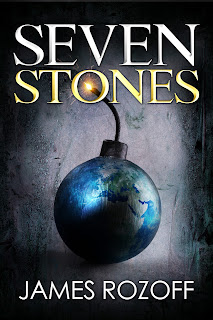 There is one more yet to come, though I have yet to come up with a name. I'll have to try real hard to have it as two words, both starting with an "S", as I have with my first two. Also, I'll try to have an "O" in the second word somewhere in the middle so my cover creator can place something inside it as she has on Seven Stones and Shell Shock.

My cover designer is the wonderful Elizabeth Mackey, by the way. You can see more of her work here:
Posted by James Rozoff at 6:30 PM No comments: