An Apology To A Cardinal (And To Birds In General) 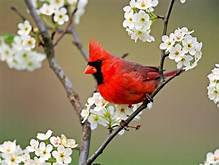 At six o’clock Saturday morning I heard the song of a cardinal. I thought it rude of him to be so noisy so early in the morning and felt that he owed me an apology for waking me up on my day off. But by 9 o’clock as I was hanging my laundry to dry, hoping to enjoy a peaceful morning, my tranquility was disturbed by a neighbor’s air compressor, and another neighbor’s motorcycle. At that point I understood it was we humans who owed him an apology.

Soon after, I took my bike for a ride, the streets for the better part silent due to the pandemic. I heard a woodpecker at work, as well as the calls of other birds I could not recognize. Like many of my kind, I have spent more time in factories than I have in nature. I can recognize the voices of countless celebrities, but few birds, can tell you who sang thousands of songs I don’t even like, but can put a beak to very few bird songs.

But in the relative silence, I hear many birds’ voices now. They seem to be speaking to me, asking if we cannot maintain the silence we’ve been engaged in of late. I would be glad to oblige, but my voice too gets drowned out by the noises of the factories and the voices on the radio and television. My voice is heard no more than the birds, and is far less appealing.

Sadly, I know what is coming. In a matter of weeks. When the summer they have waited so long for will hit full stride, not only will the countless aural annoyances civilization has produced return in full force, but another horror will be unleashed upon them. The 4th of July is not far away, a time when children and adults alike will be playing with their trauma-inducing fireworks. I feel bad enough for my dog, who slinks down into the cold, dark basement every time one surprises her. But the birds have nowhere to go. Their homes, their places of safety, are the trees, and they are no refuge from the noise and the explosions.

Still and all, I am amazed they are willing to take up residence in my neighborhood. I’m amazed at how much nature still exists in the places where we’ve done our best to pave it over. I look out front to see the birds gathered around the feeder I had bought for my mother and inherited when she passed. There are many times I look back and think of how I could have done more for my mom, but in this instance, I feel that I gave her a special gift. I think of her alone, as I am now, listening to all the sounds of birds, appreciating the beauty and joy nature provides. I hope that someday when I am home-bound, someone thinks to place a bird feeder near my window.

It is an amazing thing to travel far to see the natural wonders of the world, but there is something equally beautiful in appreciating the little miracles that flutter around us.

If they could just sleep in a little later.

Posted by James Rozoff at 5:52 PM No comments: