A Weekend Without Internet 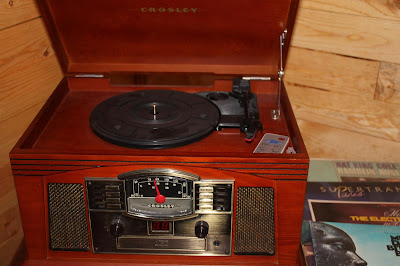 I left the house recently for a weekend cabin-in-the-woods getaway with the express purpose of leaving all connected devices behind.

It almost didn’t happen. I found as many excuses to bring something with as Bilbo found for not leaving his ring behind. But in the end my inner Gandalf convinced me that it had gotten too great a hold of me. And so my wife and I headed north in my car that lacks even a CD player, relying on the spotty reception from small town radio for any kind of news from the outside world.

Not that I had planned on leaving it ALL behind me, of course. It was my little experiment, not my wife’s, so she had her cell phone. And the cabin had advertised it had Netflix and Amazon Prime. What with a pandemic going on and deer season just starting, I knew our options for amusement would be limited. We’re not the kind of people to spend a day binge-watching, but with the woods and crowded areas both potentially lethal we had a good excuse for such an indulgence.

When we arrived at our cabin, I went almost immediately to the television in order to acquaint myself with someone else’s setup. It’s never a simple task: I was faced with four remote controls, one containing 57 buttons, the second 35, the third 29, with the Roku remote mercifully having less than a dozen. Included with them was a list of instructions written by someone who was never going to be hired for a tech writing position. 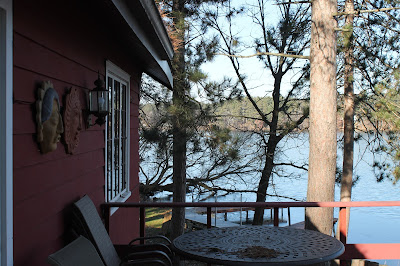 I spent an hour of my time—in a cabin, on a lake, in the woods—engaged in the very same stressful, tedious and yet oddly addictive behavior from which I had attempted to flee. And in the end, for whatever reason, I was unable to get an internet connection. Not that I didn’t try. I engaged hopefully—earnestly—in what can only be described as technological ritual. Even when I came to realize that the communion with the great other was not going to take place, I religiously performed the instructions, engaged in the holy rites which summon the spirits from their mysterious dwellings to appear before us and work their miracles. After all, belief is vital if we are to please the gods of technology enough to have them do our bidding.

Fortunately, my wife was there to urge me to let go, my faithful Sam who was with me at the moment of my final temptation. And in the end, I was able to let it go. No longer desiring to harness the awesome might of a power beyond my reckoning, I had passed the test and remained Galad—I mean, James. 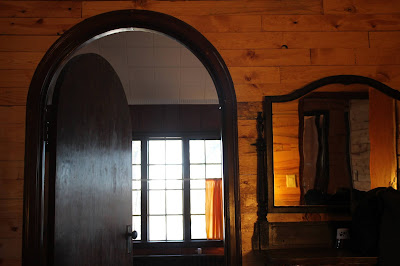 But ridding oneself from a crutch means relearning to walk naturally again. I found myself in moments where I would ordinarily turn to some device for distraction, only to find there was no ring to gently caress. I had to relearn the art of talking with another human being. I had to relearn the art of listening to that inner voice inside of me. It was a little unnerving because even though I had spent the better part of my life without the internet, it all seemed so far away from me now. But over the course of a weekend, I was able to rediscover a bit of who I was before the internet changed me. Changed everybody.

Having seen pictures of the cabin when we chose it, I knew it had a record player, and so had unearthed some albums from the deep recesses of our basement. What’s more, I was pleasantly surprised to find a rather eclectic collection of LPs at the cabin, as well. From the cabin’s library, I sampled Miles Davis’ Bitches Brew, Nat King Cole’s Rambling Rose, early RollingStones, and even Marlo Thomas and Friends (you’d have to be of a certain age to know this one). I listened to a whole side of Paul McCartney’s Ram in order to get to Admiral Halsey. I never would have listened to those other songs otherwise, not in an age where the opportunity to fast-forward is always there. 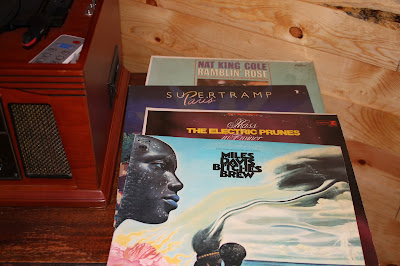 It was a pleasant, relaxing experience. I think that’s what listening to music is supposed to be like, but in the age of instant access to everything, even listening to music has the potential to cause anxiety and impatience. I often start a song only to get the urge to click another song after a minute into it. I can’t speak for everyone, but I have a tendency online to move endlessly from one item to another without ever fully appreciating anything I hear, see, or read. This has led to a dull sense of never being satisfied, with always wanting more, always hoping the next thing will be the one that gives me what I want. It never does. Hence my desire to reconnect to the world I knew before the instant non-gratification the internet provides.

We humans have a tendency to want to escape, to run away. But too often we carry with us that which we wish to be free from. So long as we have our cell phones with us, we can never distance ourselves from the habit of mindless scrolling and searching. If I had had access to the internet, I know I would not have found what I had been looking for. My inner state of being would be no different whether I was being eternally prompted by external electronic stimuli at home or in a cabin. But cut off from the great distracter that is always looking for our attention, I was paradoxically able to find a bit of myself and my past in a place that I had never been.

Posted by James Rozoff at 12:13 PM No comments: