A Sample From Shell Shock, The Sequel To Seven Stones

I had a busy week writing this week and thought I'd share a snippet:


Shuffling was heard, paws padding on soft snow. Doug found himself in the middle of the group mind, a mind whose purpose was to kill. It was an alien intelligence, an intelligence unknown but knowable, if fear and loathing did not prevent him from trying. It was not hatred, not evil, it was merely the sort of fear that caused one to kill in order to preserve the life of the pack. And Doug was incidental to it all, he sensed it. The scene acting itself out in front of him was one in which he was just an accidental observer. Blood would be spilled in order that order would be preserved, the pack allowed to survive.

Gagnon seemed to have heard something, as suddenly he raised his rifle to his shoulder, aimed, and fired. A piercing howl went up in the direction where Gagnon fired. Again, he surveyed the forest’s edge, seeming to see what Doug could not. Again a shot, again a howl.

But the movement within the woods seemed to increase. His shots were merely stirring up a swarm of angry hornets. Doug was within the caldron, could do nothing but stand and stare. Gagnon’s behavior began to grow more and more erratic, turning again and again to confront foes he could not possibly see. He turned in Doug’s direction, looked straight at him, but did not seem to see him. Still, Gagnon raised his rifle. The futility of his situation almost made him stay where he was, but a thought of inspiration made him fall to the ground.

The bullet flew over his head and again a howl could be heard from the woods, a sickening howl that conveyed all the horror of the situation. As the pack seemed to work together, so too did the entire pack seem to howl through the voice of the wolf that had been shot. But the movement in the woods only increased. Doug looked up, saw Gagnon swirling around now, attempting to ward off a threat that seemed to come from all around him. He was in the middle of a semi-circle of woods, twenty feet in all directions.

And then the first wolf came out from its hiding, a great, grey wolf with eyes that shown yellow in the moonlight. Gagnon was not looking at it, could no longer seemed to focus, instead swirling around, looking for the enemy everywhere but not seeing the danger. Soon another wolf, then another, slowly crept out of the shadows of the woods into the clearing. Three, five, ten, a score, all of them larger than Doug could have imagined. Still Gagnon turned in circles, looking for unseen dangers as the wolves slowly circled their prey, closing their distances as they moved.

At last a black wolf slipped from the shadows, seemed to be part of the shadows himself. Larger even than the others, he appeared to be the alpha-wolf. One eye only glistened a sickly yellow in the moon’s light, but its white teeth shown brightly. At last Gagnon’s focus seemed to return, as if finally seeing what it was that has been haunting him. He raised his rifle and aimed it at the black wolf, that looked at him with the one yellow eye. But there was nothing more than a click as he pulled the trigger. He had spent his ammunition.
The black wolf worked its way among the others, still part of the pack, not its driving force but the leading weapon of whatever force drove the pack on. Doug was within the circle that focused on Gagnon. He gripped the axe but had no hopes for himself other than delaying his death by a few seconds. But the wolves paid no more attention to him than Gagnon had.

The pack was continuing to close in, so close that one brushed against Doug’s leg. Doug lowered the axe in its direction but missed. Still the pack seemed unaware or uninterested in him, as if he were no more than a tree or a stone to be worked around. The occasional growl could was emitted, teeth exposed in order to get its preys attention and fear. Taking the only chance he saw, Doug started to work his way outward from the circle, picking his way slowly through the throng. He anticipated sharp teeth attaching themselves to his arm or leg at any moment, but he was able to pick his way through the throng unmolested. His back was turned to Gagnon, but he could hear him talking to the pack as if he expected them to listen. But the authority he had always had in his tone was gone now, it was full of fear, marking him as the kind of prey that was an easy mark.

Free from the circle, Doug walked slowly to the forest line, nearly as slowly as he had walked away from it. He found a pine that seemed hospitable and jumped to the lowest branch. He climbed, higher than he needed to, as high as he could. When he felt at last secure, he turned his gaze towards the clearing, saw the wolves continue their encirclement. As Gagnon turned, the occasional wolf would make a lunge at his back, forcing him to turn again. The pine branches obstructed Doug’s view so that Gagnon was one moment visible, the next hidden with reaction he made towards a wolf. He did not see when the first wolf took him down, only heard the scream of pain. The rest he only partially saw. Doug would not have been able to look away, but he was grateful he could not see it all. The screaming abated and soon after so did the snarls. He couldn’t tell for sure—perhaps he only imagined it—but he thought he saw Gagnon gaze up to his spot in the tree as he was on the ground, a resigned look in his eyes the same as Doug had seen in the deer’s.
Posted by James Rozoff at 7:28 PM No comments: 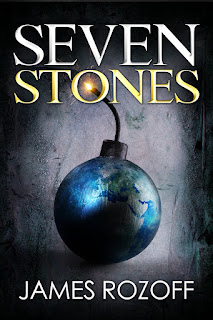 Back in the attic of the brownstone house, a lamp was lit. What had appeared a moment earlier to be a group of strangers now talked quite familiarly with one another.
“He’s gone,” said a voice coming from the stairs.
“Are you sure?”
“Yes. He hopped a street car headed north.”
“Damn magicians,” said the one who was called Professor Munchin, “they should stick to amusing children with card tricks.”
“It’s Houdini who got them started,” said a heavyset man who was dressed in a suit of such finery that it left little doubt as to his wealth and position in society.
“Houdini’s going to get his before long,” said Munchin. “But this Slatterini fellow has proven to be a rather useful idiot. Whatever publicity he provides should keep our real work from being discovered. No better cover than to have the world believe we’re scam artists, eh?” Munchin chuckled, as did the heavyset man, pleased with themselves.
“Well, now that that’s taken care of, suppose we proceed with the real order of business for the evening,” said the woman who moments earlier was feigning outrage.
“Are you sure you’re still up for it?”
“The longer we delay, the more I fear to do it. Let us put it off no more.”
“Very well, then. Let us gather around the table.”
Removing one chair from the gathering, the six individuals resumed their seats at the table. Hands were once again clasped, heads bowed in the dim light of the gas lamp. Led by Munchin, the group began a low humming while swaying slightly to an unheard rhythm.
Where the presence came from they did not know. Whether it made its appearance in the center through an opening they had created, or whether it wormed its way through their individual life forces to become a single entity in their midst was impossible to say. They only knew they felt a seventh spirit among them, separate from the group and yet oddly connected.
It was hard to know where one of them stopped and the other started. Clenched hands reached deeper than the surface, seemed to merge into the other until it almost felt as if each was clutching the beating hearts of those next to him. And in the middle of all was this strange new entity, as though it were the solution that enabled them to dissolve one into the other. And as their hands seemed to reach deeper than the surface, so now this apparition seemed to reach into the hearts of each of them, like spokes in a wheel.
“What’s happening?” said the woman to the left of Munchin, a concerned quiver in her voice.
“Stay calm,” Munchin said, exhibiting none of what he preached.
The members who sat about the table no longer swayed but began to shake as if in convulsions.
“There’s something wrong!” screamed a member of the circle. “We can’t control it.”
“Don’t worry,” said Munchin, “I have the amulet. Whatever I summon must respect it.”
“Where is it?” screamed the woman.
Munchin looked down, panic welling up on his features. But panic soon changed to pain as something seemed to grab a hold of him, as if a hand reached up inside his chest and around his heart. Soon, all of those around the table shared the same look of agony on their faces. A vague shape above the table was noticeable, its features indistinct except for a malevolent grin. It was only a few seconds before they all slumped forward dead onto the table.

Seated on a wooden seat aboard a streetcar, a young man snuck a glimpse of a pendant that he half-pulled from his pocket. His expression was one of intense curiousity.
“I hope they don’t notice this missing.”

Posted by James Rozoff at 6:42 PM No comments: