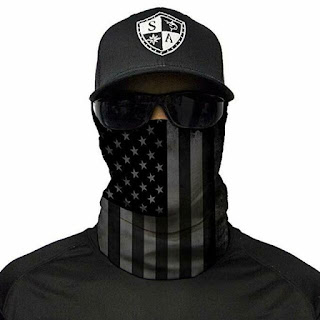 I’ve never been into fashion because I always figured it was just another way the elite were trying to dictate how we should live. Not bad enough that they were always telling us how to organize our society or who we should bomb, they wanted to dress us, as well. And as a straight, white, blue-collar male, I figured fashion had little to do with my type. 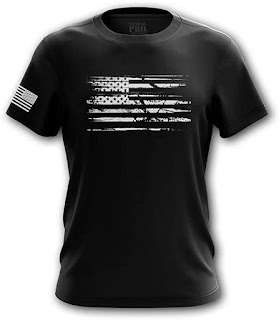 But in the 21st Century, I can’t help noticing us Joe Six-packs are as much victims of fashion as anyone. I see it everywhere I look nowadays among aging males with beards, bellies, and calloused hands, wearing all kinds of apparel with the letters HD prominent in order to denote the name brand. I never thought I’d see the day where my fellow boilermakers were making me feel self-conscious about my sartorial choices.

Another new fashion choice I’ve noticed among my fellow metal fabricators recently is the faded or darkened U.S. flag. I see it everywhere, but nowhere so much as when it is used to cover people’s mouths and noses in this, the Covid-19 era. I think it is the gun-owner’s way of subtly protesting the need for masks, a way of saying that their rights are being trampled by the pandemic without actually resisting.

I deem these darkened or damaged flags a fashion statement rather than a political one because there is no explicit ideology or cause tied to it, just a posture. It is no BLM or Gay Pride or Blue Lives Matter flag. A political statement is an explicit statement. A fashion statement may be a statement, but it is a subliminal one, one not fully or perhaps even partly understood by those who engage in it.

The underlying statement made by this current darkened flag fashion seems to be a commitment to a particular narrative of our nation no matter how tattered or dark it becomes. It is a narrative they must have picked up when they were mere children and never developed or modified since then, a narrative best symbolized by muscle cars, Rambo, and professional wrestling. I like a 440 big block as much as the next guy, but I recognize the days of Superbirds are never coming back. I'm not going to mistake nostalgia for patriotism, nor am I going to get all Goth about it.

I had notions of what the flag stood for when I was young, too. I remember how pretty the U.S. flag looked to me. I was 10 years old during the Bicentennial when patriotism was on the rise. It was a time for looking back at two hundred years of history, and as we prepared for the anniversary, we prettied up our nation. In the same way as we might dust off ornaments we are to use for a holiday, everything American was dusted off to make it look new and bright and vibrant. I remember our fire hydrants were painted up to look like patriotic figures like Uncle Sam and Abe Lincoln. I remember, even though our country was two hundred years old, that we were giving it a careful makeover to ensure that it was in proper shape to meet the future. We were celebrating the past because it had stood the test of time and felt our country was poised to thrive for another two hundred years.

The flags on display were new. Their colors were sharp, vivid, distinct. There was a richness to be found in the simple reds and whites and blue. There was a crispness to the material. It made a child feel good to be American

Flashforward to a present where few people would know how to put a decent crease in a pantleg. The flag they wear—which was never meant to be worn—is a mockery of the one I knew. It is menacing. It’s unsettling the way Nazi sculpture is unsettling. Like fascism, it does not stand FOR something but seems to stand AGAINST something. Anything. Everything. It is nihilistic. I can only imagine how a child feels who sees one of these dark flags.

I find the notion of embracing a worn and faded flag, rather than repairing it or sewing a new one, to be unhealthy. It’s like sticking to a diet of cheeseburgers after your third heart attack. And being proud of it. It’s like trying to fit into the same clothes you wore in high school when you’re fifty. It’s like never really letting go of your first love and never finding happiness. It’s like failing to adjust to a new environment. It’s like not feeling the need to improve yourself but instead resting on former glory. That dark flag is like Al Bundy sitting on his couch telling you how he won the big game back in high school.

Like I said though, I don’t think the black flag is an overt statement of politics but a subliminal expression of a mood or trend. People have flirted with fascism as fashion before. I wouldn’t accuse those who sport the dark flag of being fascists but I won’t approve of their fashion choice, either. And if it is in fact a political statement, I don’t much care for it. I’ve always been suspicious of those who use fashion to announce their political beliefs because I’ve always seen it as posturing over substance.

My suggestion to those who wear a darkened or faded flag because they identify with it is this: delve into the history of the United States with an open mind and an open heart. Do not seek to deny or white wash the darker elements, but find the ideas and moments in our history that make you feel good. Not necessarily proud, because pride is the worst of the deadly sins, but something that makes you feel good. And then carry that into the present and see how it relates to today. Because if something makes you feel good—not proud or superior—it very definitely has value in the present. Take the very positive feeling you have from being a part of the United States, and use it to create something positive in the present that will make future Americans proud of the country they happened to be born in.

But for God’s sake, the future will not look back proudly at an ugly and menacing flag like the kind you’re covering your face with.