A Magical Place Called "Away"

When we are babies, we can’t really grasp the idea that someone can still exist if we cannot see or hear them. When our mother is gone we feel as if we have been abandoned and we might never see her again. Gradually we are introduced to the idea that just because we close our eyes does not make the outside world cease to be. Our parents cover their eyes and then ask where we are and we giggle at their stupidity, having forgotten we once thought the same way.

When I was a child there once existed a magical land where we could send everything that was bad in our lives. It was called “away”. If there was something cluttering our house, we could simply send it there. When I useded the toilet, the results of my efforts were similarly sent “away”, never to be seen (or smelled) again. It was magic, but then again, childhood is a magical time.

Gradually it dawned on me that “away” was not the same thing as “far away”. When I threw my candy bar wrapper out the car window, I thought I was throwing it “away”, but my parents informed me it was not “away” until it was in a trash can. That apparently was where the magic happened, like a woman walking into a magician's cabinet and simply vanishing. And sure enough, I came to realize that when someone threw something out a car window, it just stayed on the ground.

Still later on in life I discovered that a garbage can was not a magical portal to nowhere. The things we no longer wanted did not cease to exist just because we put them in there. In fact, a rather complicated process was involved. My older brother was taxed with the burden of taking the trash from the house and putting it on the curb, where a large and noisy truck picked it up and delivered it to the void from which nothing is ever again seen or smelled.

Then I learned about Mount Trashmore. Mount Trashmore was the name given for where all the garbage that was taken by the big noisy trucks went. If you got close enough, you could smell it. There were vents put into it so that the noxious gasses might escape. The gasses were lit on fire so that night and day they burned.

When people talked about Mount Trashmore, they spoke of it contemptuously. It was a bad thing, a place to be avoided. We viewed it the way we view people we don’t regard very favorably. Just as we blame people who live on the other side of the tracks for being wretched, so to did we blame Mount Trashmore for being the disgusting thing it was. Which is pretty weird when you stop to think of it, blaming a mountain of trash for existing. But we did, and we heaped scorn on it because it was ugly and smelly and it was most likely unhealthy to be around.

There was something similar a couple of towns over. It was a pond that stunk to high heaven. On a bad day, it would make the whole town smell terrible. I never knew what it was but it was likely farm runoff, or perhaps the unusable leftovers of a slaughterhouse being dumped into a drainage ditch. I hated that town because of the smell. I’m sure a lot of other people felt the same way. I was glad that it was far enough away from my own town. Of the two, Mount Trashmore was way less stinky. Not only that, it was said that it would one day be made into a ski hill. I looked forward to that. I could never imagine wanting to swim in that pond.

The more I grew and the more I travelled, the more the magic disappeared along with my childhood. I realized a magician couldn’t really make a woman disappear by sticking her in a box and speaking an incantation. I learned, too, that “away” did not exist in any of the places I had ever visited. In fact, at some point in my life, I realized there was no such place as “away” at all.

And yet “away” is still part of the equation for most of us. I don’t think there’s ever been a time like the present where we throw away as much as we do. In the last couple of decades we have switched from paper bags to plastic bags when we buy our groceries. We buy oranges pre-peeled and put in plastic containers. My God, we even buy water in single-use plastic bottles. And we throw them “away”.

If you work for a corporation, "away" is an even bigger part of the equation. For a corporations, "away" is any place that doesn't cost you money. Very real people live in this land. People who are poisoned and get cancer from the toxic stuff corporations throw "away". Animals live there too, just not as many as there used to be. There's nothing very magical about "away" to those who live there, but it's pretty damn magical to those who profit from believing in it.

We are mostly a society of children, covering our eyes, believing we’ve sent what is no longer useful “away”. There is no "away". It's time to grow up. Because we are throwing our entire planet "away". 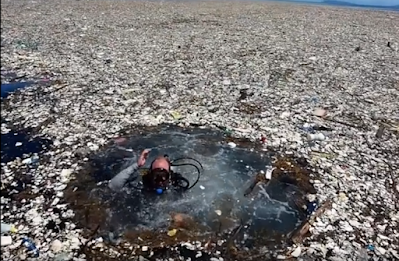