How Do You See This Apple? 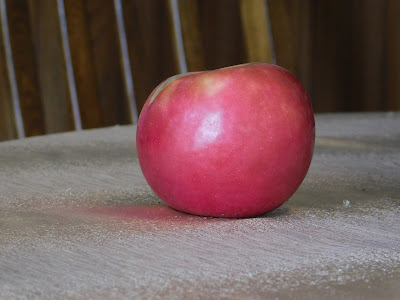 Here is an apple. Nothing much to argue about in that statement, but I’m willing to bet people will be able to disagree on anything. Some may see it as the downfall of Adam and Eve and call me the devil for posting a picture of it. Others will name what variety of apple it is (it’s a Snow Sweet) and what recipes it would best be used in (I used it in an apple cobbler).

Even with something as simple as an apple, no two people see it exactly the same. But let me point out one striking difference in the way we can view it—or view anything, really: we can either view it through a materialist or spiritual lens.

If we choose to see this modest little apple through a spiritual lens, what we see is a gift from either our earth mother or sky father. Perhaps we can even see it as the miraculous result of the two intermingling. From a spiritual perspective, it is a blessing bestowed upon us with love. And we can show gratitude by accepting it joyfully and by living in accordance with the laws he or she or both have set for us. We are called upon to live a sacred life, one full of miracles that we are able to observe even in such simple and abundant a thing as an apple.

The alternative is to view it through a materialist lens. No miracles exist here, no sacred connection. There’s something to be said from viewing from this perspective. Freed from notions of deeming this little guy a miracle, we are free to improve upon it. We can make them easier to grow, maximize yield, fight any disease or infestation that might plague them. Potentially, we can employ a materialist approach to provide food for everyone and minimize the risks of famine. But in order to do that, we must drop the idea of sacredness, which limits both the upside and the downside of a materialist world-view.

Through the market view of the world—ostensibly a materialist view but in fact a bit of a belief system in its own right--we view an apple as a commodity. It no longer has any sense of the sacred (nothing does in a free market),it is merely something to be bought or sold. It has no value beyond what it has in the market, no purpose other than to be consumed or transformed into wealth. Should it end up feeding some wild animal in nature, it will be deemed a loss and action will be taken to eliminate such loss in the future.

While the producer of the apple has some connection with the miracle of its creation, it is not a reverent one. His goal is to maximize productionm heedless of the sacred source from which it springs. The ultimate cost to earth mother is not factored into his equation. And most of those who profit from the sale of this apple never see the apple nor the farm upon which it was grown.

In order for the seller of the apple to maximize product, the apple is given added adjectives. It is no longer merely an apple but a “sweet”, “crisp”, apple, full of “nature’s finest”. Like a prostitute sold by her pimp, the apple is tarted up and given a sexy name. It is made to look more appealing, more perfect, more desirable through artificial means. It is waxed and sprayed and displayed to appeal to your eye.

The apple you see in this picture is not that sort of apple. It is less than perfect. It has a slight blemish near the top that might make it unsuitable in a market. In a market environment sitting next to one of those tarted-up apples, you would be unlikely to choose it. Its inherent worth and healthiness requires more than a superficial glance.

I bought this apple from someone who grows and picks apples. Though a financial transaction took place, there was a degree of the spiritual aspect maintained. When I consume this apple, I am aware of where it came from. I assure you I will eat it with a sense of the sacred, feel deeply that it is a gift from the earth mother and sky father. I eat it with an awareness that I quite simply cannot permit myself when I am eating an apple that has been sprayed and treated. It is much more than merely a product consumed in order to enhance my ability to work and succeed in the market place. It is more. I am more.